The space-age devices are part of a project designed to enhance the ease and frequency of data collection for crop testing in ways that will eventually benefit all agricultural production around the world. 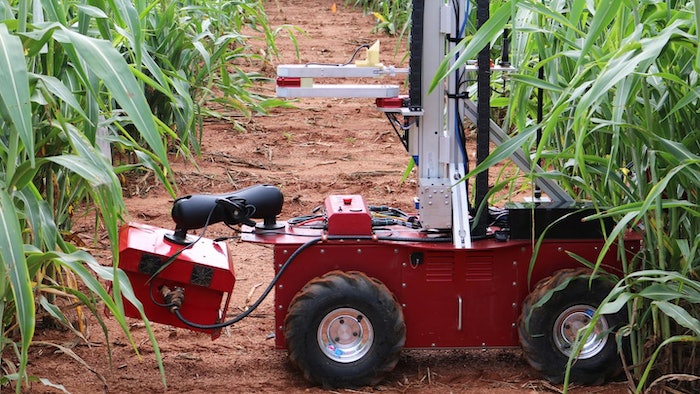 A rumbling robot and several high-flying drones recently made an on-site appearance at Clemson University to burrow through and buzz above 15 acres of experimental sorghum plots containing more than 2,800 replicated entries.

The space-age devices - conceived and constructed by The Robotics Institute at Carnegie Mellon University and the commercial company Near Earth Autonomy - are part of a collaborative project with Clemson University and other partners designed to significantly enhance the ease and frequency of data collection for crop testing in ways that will eventually benefit all agricultural production in South Carolina and around the world.

In September 2015, Clemson University's Institute of Translational Genomics, led by geneticist Stephen Kresovich, was awarded $6 million by Advanced Research Projects Agency-Energy (ARPA-E) as one of six projects seeking to accelerate the development of sustainable energy crops for the production of renewable transportation fuels. When combined, the Transportation Energy Resources from Renewable Agriculture (TERRA) projects were allotted a total of $30 million.

Clemson's three-year project, with Kresovich as principal investigator, is titled "Breeding High Yielding Bioenergy Sorghum for the New Bioenergy Belt." For the past year, Clemson has been working with Carnegie Mellon, Near Earth Autonomy and the Donald Danforth Plant Science Center to form an unprecedented approach to advancing agriculture and plant breeding. Kresovich has been leading a team of geneticists, engineers and computational scientists in an expansive examination of the genotypes and phenotypes of a massive international set of diverse sorghum materials.

On Aug. 5 and 8, ground and aerial robots were put on grand display on the sprawling grounds of Simpson Research Farm in Pendleton.

"Our intent is to develop a vertically integrated system that includes breeding, genomics, robotics, sensing and computational sciences in order to generate and analyze broad amounts of data to identify genotypes or varieties that can be used for the production of liquid transportation fuels," said Kresovich, Coker Chair of Genetics at Clemson. "At present, we work fields by physically moving through them and examining them visually or measuring traits in a slow and cumbersome manner. With these new technologies, we hope to be able to do this many times faster and far more accurately and precisely."

With the assistance of TERRA project manager Barry Flinn, graduate students Zach Brenton and Rick Boyles, field manager Justin Butcher, Simpson Research and Education Center director John Andrae and others, Kresovich has overseen the management and data collection of several "common gardens," with the two largest located at Simpson Research Farm and at Clemson's Pee Dee Research and Education Center in Florence. Contained within these gardens - which are scattered throughout the nation - are more than 6,000 entries of experimental bioenergy, forage and grain sorghum.

The Carnegie Mellon group is led by George Kantor, Senior Systems Scientist for The Robotics Institute. Kantor said that his engineers and Clemson's geneticists "speak a different language," but they've still managed to form a great partnership.

"We have complementary skills. We bring in the technologies for the robotics, sensing and computational sciences. Steve Kresovich and his group bring in the expertise for the breeding, genomics and genetic diversity," said Kantor, whose team includes Stephen Nuske, Omeed Mirbod, Tim Mueller-Sim and Merritt Jenkins. "It takes a lot of patience and a special group of people to talk to each other and make that connection. Plus, Clemson has these unique environments for agricultural systems that are rivaled by only a very few."

Kantor's team transported an unmanned ground vehicle from Pittsburgh to Clemson, while Pittsburgh colleagues Near Earth Autonomy contributed several drones of various shapes and sizes. All the devices were equipped with high-tech cameras, sensors and embedded computers. The ground robot, though bulky in appearance, was able to gracefully navigate between dense rows of sorghum, often disappearing beneath the towering stalks. The drones, meanwhile, surged above the fields with the grace of hummingbirds, alternating between swift bursts covering hundreds of feet to long periods of steady hovering. The amount and quality of the generated data was dazzling.

"I've been working for about 20 years in robotic technologies for agriculture, and we've become really good at driving around and looking at things," Kantor said. "But the ground robot we brought to Clemson is novel because it has the ability to reach out and contact the plant. This is challenging for a robot, but this project is allowing us to break that barrier and start to contact plants and intelligently sample and manipulate them."

The aerial data collection group is led by Paul Bartlett, Principal Systems Engineer at Near Earth Autonomy. Bartlett said the aerial approach complements the work done by the robots on the ground.

"While the ground robots can carry bigger instruments and get up-close views of the crops, we are able to cover multiple acres in a few minutes, creating a snapshot of the entire field," said Bartlett, whose team includes Sanjiv Singh, Adam Stamber, Gary Sherwin and a flight crew. "The sensor suite developed by Near Earth ambitiously combines three camera types and a laser scanner, all of which were chosen explicitly to support accelerated breeding of energy sorghum."

South Carolina Commissioner of Agriculture Hugh Weathers came to Pendleton on Aug. 5 to attend the TERRA field day. The longtime commissioner said he was "very impressed" by the series of demonstrations and discussions. "I'm pleased that this level of technology is going on in our own back yard, which means South Carolina farmers should be among the first to benefit. It can be deployed in their fields the same way it has been done here in these experimental fields."

"We're working with sorghum now," Kresovich concluded. "But this research will eventually apply to all crops and cropping systems. These techniques and technologies, if successful, will be implemented across agricultural systems around the world in the 21st century."