Learning about the radiation near Earth helps us to better protect our satellites.

The BARREL team is at Esrange Space Center near Kiruna, Sweden, launching a series of six scientific payloads on miniature scientific balloons.

The BARREL team launched the first balloon of this campaign, the fourth for BARREL, on Aug. 13, 2016.

The NASA-funded BARREL, which stands for Balloon Array for Radiation-belt Relativistic Electron Losses, primarily measures X-rays in Earth's atmosphere near the North and South poles.

These X-rays are produced by electrons raining down into the atmosphere from two giant swaths of radiation that surround Earth, called the Van Allen belts.

Learning about the radiation near Earth helps us to better protect our satellites.

Several of the BARREL balloons also carry instruments built by undergraduate students to measure the total electron content of Earth's ionosphere, as well as the low-frequency electromagnetic waves that help to scatter electrons into Earth's atmosphere.

Though about 90 feet in diameter, the BARREL balloons are much smaller than standard football stadium-sized scientific balloons.

This is the fourth campaign for the BARREL mission. BARREL is led by Dartmouth College in Hanover, New Hampshire.

The undergraduate student instrument team is led by the University of Houston and funded by the Undergraduate Student Instrument Project out of NASA's Wallops Flight Facility. 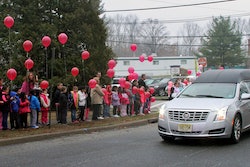