Experts Use Drones to Search for Raw Materials

Engineer trades in his office for a cabin on a ship off the coast. 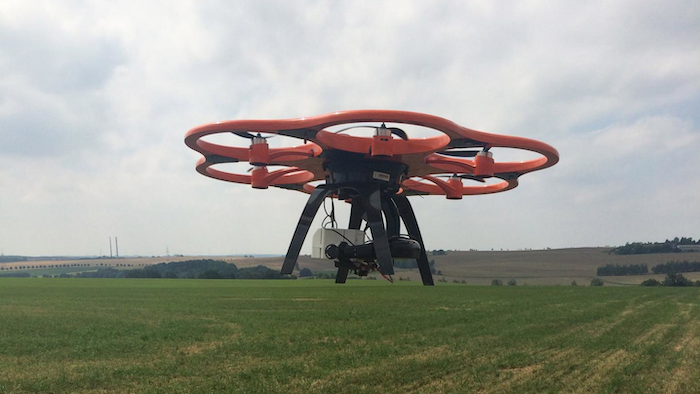 The exploration technology division of the Helmholtz Institute Freiberg for Resource Technology makes use of drones.
HZDR

The technical expertise of the Helmholtz Institute Freiberg for Resource Technology (HIF) has been requested to support mineral exploration of zinc deposits in West Greenland.

The scientists of the HIF, part of the Helmholtz-Zentrum Dresden-Rossendorf (HZDR), are combining the use of drones alongside various other more traditional exploration methods.

The aim of this project is to produce high-resolution geological maps of two remote areas of approximately 15 km2 each.

Since August 9, 2016, HIF engineer Robert Zimmermann has swapped his office at the HIF for a cabin on a ship off the coast of West Greenland.

He is part of a small international team lead by the Geological Survey of Denmark and Greenland (GEUS) and the Greenlandic Ministry for Mineral Resources that aims to acquire a more detailed insight into raw material potential in Greenland.

For his share of the work, Zimmermann has various types of measuring systems on board, some of which are operated using drones.

The area where the drones are being used is the Karrat region in West Greenland where large deposits of zinc are known to exist. The overall raw material potential in this area is already known as zinc has already been mined in the Maarmorilik area, in the southern part of the Karrat region.

In order to better estimate the volume of the zinc resources and to pinpoint their exact location, the geological research institution GEUS is calling upon the know-how of German experts for assistance.

Robert Zimmermann is responsible for hyperspectral instruments and drones as well as data collection for the exploration technology division of the HZDR, lead by Dr. Richard Gloaguen. Dr. Gloaguen, a French research scientist, presented the division's work to the European raw material network - EIT Raw Materials - at a conference in Copenhagen. This presentation caught the attention of GEUS as Dr. Gloaguen's team is one of the few which combines various measuring techniques with unmanned aerial vehicles, more commonly known as drones in Europe.

The researchers are able to combine geological data collected from multiple innovative sensors at different scales in a comprehensive model in order to estimate the potential of raw material deposits without even having to penetrate the Earth's surface.

Non-invasive exploration, "that is our strength," said Richard Gloaguen. His team travels the globe and was recently in Namibia and Spain. They are currently contributing with their technical expertise to the exploration work in Greenland.

From their base station on the ship, Robert Zimmermann and the other expedition participants are either flown by helicopter or transported by boat to the exploration areas. "We start at the edge and work inwards," said Zimmermann. "Many deposits are surrounded by alteration or transformation zones.

These zones are dominated by the presence of alteration minerals, usually diverse silicon or sulfur compounds. By firstly identifying these minerals in the vicinity of the deposits, we can then draw inferences about the possible zinc content."

Zimmerman explained that the researchers use two hyperspectral cameras, an x-ray fluorescence spectrometer and a reflectance spectrometer to measure the spectral properties of the minerals contained in the outcropping rocks.

"Each type of rock shows characteristic images when exposed to sunlight or x-rays," he said. "From the data collected we can produce a consistent image of the distribution of the alteration minerals in the rock massif. Combined with our geological knowledge this allows us to infer which areas are rich in a particular mineral, in this case zinc".

"In the end, this type of geological exploration requires fewer samples, and consequently, requires less laboratory work and reduces costs," said division head Richard Gloaguen. "In addition, these methods allow information to be collected from exploration areas that would otherwise be difficult to reach. It is then up to GEUS to pass on this information to potential investors. However, the exploration technology that we have developed may also be of interest to industry." The Helmholtz experts also want to use the Greenland expedition to further develop their own research approach. Once the data has been collected on-site in Greenland, it will be analyzed in September with the help of a GEUS researcher at the Helmholtz Institute Freiberg.

GEUS assumes that there are various rich deposits of raw materials in Greenland. The Karrat area in West Greenland is one of the most well-known zinc deposits on the island.

Today, zinc ores are mainly mined in the People's Republic of China, Australia, Peru, India, the United States, Mexico and Canada. The metal is used mostly for corrosion protection of steel and iron components, but also in batteries and in the construction industry.