China has a need to bring home more of its brightest minds as it works to transform its largely labor-intensive, low-tech economy into one fueled by science and technology. 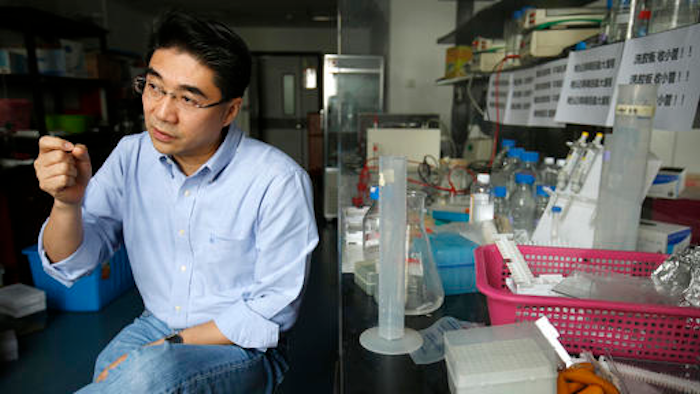 In this April 13, 2016 photo, Li Chenjian, a vice provost at Peking University, speaks during an interview at the school's campus in Beijing. China is recruiting thousands of high-achieving overseas Chinese to come home through the 1,000 Talents program, one of many state efforts launched in recent years to reverse a decades-long brain drain.
AP Photo/Mark Schiefelbein

BEIJING (AP) — As a young biologist at the University of Michigan, Chen Xiaowei had plenty to like about life in the U.S. He was paid well as a researcher and enjoyed raising his family in Ann Arbor, a town he remembers as beautiful, friendly and highly educated.

But an offer from a Chinese university for him to return home to Beijing was too generous not to consider. In addition to a comparable salary, he was promised enough startup research money that he wouldn't have to worry about pursuing grants, and as he saw it, there was a chance to make a bigger difference in China. So in 2014 he moved back with his wife and two children.

"I feel freer to pursue my best ideas," Chen said. He said he has received such generous support that he's able to study a disease through symptoms in both the liver and muscles simultaneously — something he said he would not able to do in the United States because of limitations on grants, which are often tied to projects instead of researchers.

Chen, who earned a doctorate in physiology at Michigan in 2008, has joined thousands of high-achieving overseas Chinese recruited to come home through the 1,000 Talents program, one of many state efforts launched in recent years to reverse a decades-long brain drain.

China, the world's second-largest economy and one of the fastest-growing, sees a need to bring home more of its brightest as it works to transform its largely labor-intensive, low-tech economy into one fueled by innovation in science and technology.

Forbidden to study abroad until the 1980s, Chinese students have been attending foreign schools in growing numbers. More than 300,000 studied in the U.S. alone in the 2014-2015 school year.

Most of those students return to China, but the country has had difficulty regaining the most coveted graduates — those with advanced degrees and experience in science and engineering.

A 2014 report by Oak Ridge Institute shows 85 percent of the 4,121 Chinese students who received doctorates in science and engineering from American universities in 2006 were still in the U.S. five years later. Still, that marked an improvement: The stay rate had been 98 percent a decade earlier.

The 1,000 Talents program offers recruits salaries several times more than what a Chinese-educated local hire would receive, as well as heavily subsidized education for children and millions in start-up research funds. The sign-up bonus alone can be as much as $150,000.

Chen, now an assistant professor at Peking University, was given a $1.5 million research fund. "In the states," he said, "it's very hard for young people to get money when they need it the most."

Beijing says the leading 1,000 Talents program since 2008 has brought back 6,000 people who have become vital forces in areas such as science and technology, education and high-tech industry. Similar programs have mushroomed at provincial and municipal levels.

Researchers say 1,000 Talents and similar efforts have worked but with limited success. China is handicapped by a bureaucratic academic system, less-than-friendly political environment, inflexibility in immigration practices and other concerns including pollution.

"I think that the programs to bring back people full time have had some success, but those are not the best people," wrote David Zweig, director of the Center on China's Transnational Relations at the Hong Kong University of Science and Technology, in an email to The Associated Press. Zweig has studied China's efforts to compete for global talents for 25 years.

He said his research shows that full-time overseas recruits are generally better than homegrown talents, although the very best have yet to return to China. He blames that on the bureaucracy on Chinese campuses and in scientific labs, where administrators wield too much power and complicated interpersonal relations hinder research.

In China, leaders are deliberating about reforming higher education and easing immigration policies, but for now, the money-dropping 1,000 Talents program serves as a quick solution.

Still, it has had problems of its own. Some scholars kept overseas positions while taking full-time paychecks from Chinese schools, or had forged credentials, leading to measures to disqualify those who have been dishonest academically.

Younger graduates such as Chen have been a focus of the program only in recent years. Previously, it only targeted senior academics in their 40s.

"That is considered past the prime of a researcher, especially in the field of science and engineering," said Li Xia, a professor of philosophy at Shanghai-based Fudan University. "Why should we pay a good price for someone's declining years?"

Other concerns persist, abroad and at home.

In the U.S., private corporate security officials have raised concerns that recruits are being enticed and compensated for access to sensitive material at American firms and universities. They point to cases like a 2015 federal indictment in which several Chinese researchers — recruited by a Chinese university — were accused of stealing trade secrets from a California company and economic espionage.

In China, concerns center on whether it's fair to give foreign-educated Chinese special treatment.

"The local faculty is not opposed to attracting talent but we want equal opportunity, not increasing disparity," Li said.

Such sentiments were on display last year when Tu Youyou won a Nobel Prize in medicine for the discovery of an effective malaria treatment. She was the first Chinese to win a science Nobel for work conducted in China, and she never studied abroad. Many comments took the moment to mock Beijing's worship of foreign experience.

China's Ministry of Human Resources and Social Security, which helps implement the talent program, did not respond to faxed questions from the AP.

Some returnees see an opportunity — even an obligation — to help change China's education system. They hope to introduce new practices and help set rules, often modeled after the U.S. ones.

Li Chenjian, a neurologist who studied at Purdue University and is now a vice provost at Peking University, is pushing for reforms. Li now considers himself more of a reformist educator and offers a course on critical thinking. He is pushing for more holistic evaluation of high school students in the admissions progress, rather than relying solely on test scores from the annual college entrance exam, and he is building connections between Peking University and foreign universities.

"I think the great thing for U.S. universities is to have their people to go to other places to be leaders," Li said.

"The impact will be 100 times more here," he said. "We're changing a humongous system."

Rao Yi, a prominent neurobiologist, has become a lightning rod in China's academic world. His criticism of China's education and research systems has been published in international journals since he left Northwestern University to take a position at Peking University.

Shi Yigong, an accomplished professor of molecular biology at Princeton University, gave up his U.S. citizenship after returning to China and is now a vice president of Tsinghua University. He says efforts such as 1,000 Talents make it easier for Tsinghua to hire top-notch researchers.

Shi said that during his 18 years in America, "I felt like I had been a bystander, not a contributor. I wanted to be part of the progress."

Chen, the Michigan-educated biologist, said he and his wife still consider themselves "true Wolverines," and that he's putting that American experience to good use. This summer, he is helping create a professional organization for biologists in China.

"There are opportunities to grow with a developing system. There are lots of raw talents in China, and lots of students are willing to work with you," Chen said. "There's a great need to polish minds, and I see opportunities to contribute."