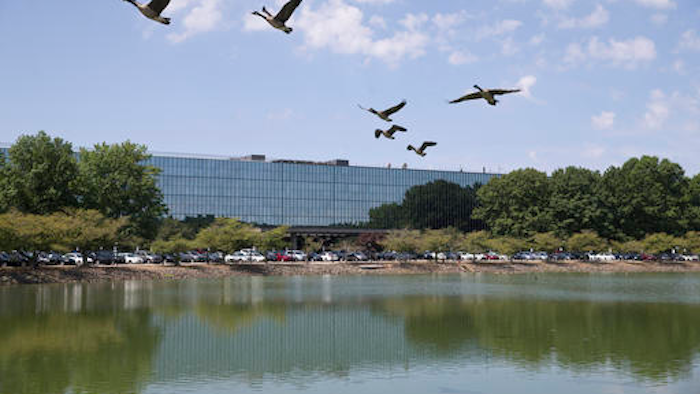 In this Wednesday, July 20, 2016 photo, the long vacant, former Bell Labs building is seen in Holmdel, N.J. The 2 million-square-foot building where Bell Labs scientists helped launch modern cellular networks before it became one of the country's largest vacant office buildings is drawing companies with the lure of working at a complex surrounded by technological history.
Doug Hood/The Asbury Park Press via AP

TRENTON, N.J. (AP) — The 2 million-square-foot building where Bell Labs scientists helped launch modern cellular networks before it became one of the country's largest vacant office buildings is drawing companies with the lure of working at a complex surrounded by technological history.

A water tower in the shape of a transistor, which the company's scientists created in 1947 as part of their continuing mission to improve and expand communications, stands over the Bell Works complex in Holmdel, near the site where the Big Bang theory of the universe was proven.

With that history, the developer who acquired the building in 2013 after it sat vacant for seven years is hoping to lure tech entrepreneurs and others to the glass and steel structure originally designed by Eero Saarinen, who also designed St. Louis' Gateway Arch.

Somerset Development President Ralph Zucker envisions the office space as a "metroburb" anchored by tech companies that are joined by retail, entertainment, health care and nearby homes.

"It's an attractive building with an incredible history that was a cradle of many innovations," said Zucker.

Aside from the allure of being surrounded by history, the state's Economic Development Authority also offered millions in tax credits to companies considering moving to the complex.

Plans also call for Toll Brothers to develop up to 40 single-family homes and 185 age-restricted townhomes, as well as a field house for sports.

Mayor Eric Hinds said the redevelopment will build on the work of the past, which itself transformed Holmdel from "a farm town into a corporate destination."

"It gathered a unique variety of research areas in one company," said Eckert. "The scientists were really good at looking at the big problem and coming up with a solution and improving on it."

The company operated out of offices throughout the New York area and scientists worked to link the nation by phone. The next step was bridging the Atlantic Ocean.

Needing to conduct experiments away from radio static generated in the city, the company acquired land in Holmdel, about 45 miles from New York. It was there in 1932 that Karl Jansky, who was studying how to expand overseas calls, discovered radio astronomy by bouncing radio signals off the Milky Way.

The mission to expand and improve telecommunications continued and researchers looked toward space when they developed the Telstar satellite communications system. It was also during the 1960s, Bell Labs scientists created the Unix computer still used today.

The company has 14 Nobel Prize winners, including Steven Chu, who developed methods to cool and trap atoms with laser light when he worked in Holmdel.

Bell Labs' radio telephone division moved into the Holmdel research lab complex in 1962. It was put up for sale in 2006 and the breakup of AT&T in 1984 meant Bell Labs went through several evolutions. Despite perceptions, it never went away. Today, it is known as Nokia Bell Labs in Murray Hill, New Jersey.

President Marcus Weldon said the mission to invent the future of communications remains the same.

"The names of the labs have changed," said Weldon. "But as we enter the network, we take on pre-eminence importance."