You'll be able to unlock Samsung's new phone by just looking at it. 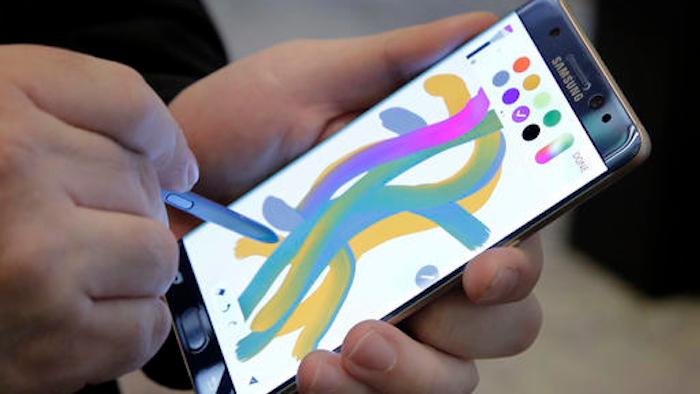 In this July 28, 2016, photo, a color blending feature of the Galaxy Note 7 is demonstrated in New York. Samsung releases an update to its jumbo smartphone and virtual-reality headset, mostly with enhancements rather than anything revolutionary during a preview of Samsung products.
AP Photo/Richard Drew

NEW YORK (AP) — The Galaxy Note 7 will come with an iris scanner, which matches patterns in your eyes with what was detected by your phone during setup. It offers an alternative to fingerprint ID, which doesn't work well when fingers are wet. Of course, the four-digit passcode will still work.

"We challenged our engineers to design a security system that's convenient and safe at the same time," said Justin Denison, a senior vice president for product strategy at Samsung. "It took five years to perfect, but it only takes a glance to unlock your phone."

Samsung isn't first, though. Microsoft's Lumia 950 phones had it.

Beyond that, the updates in the Note 7 are mostly enhancements, such as a stronger glass screen and more storage — 64 gigabytes, or double what Samsung usually offers, plus a slot to add more.

The Note 7 comes with a better camera — but it's the same one that the smaller Galaxy S7 phones got in March, save for interface enhancements to access settings and switch between the front and rear cameras more easily.

Samsung had lost its mojo after Apple matched the company on size with the iPhone 6 and 6 Plus in 2014, but thanks to the popularity of the S7, Samsung just reported its best quarterly financial results in two years. The new Note 7 phone comes weeks before Apple is expected to announce new models.

Samsung typically releases its regular-size phones in the spring and jumbo phones in August. This time, Samsung has just one large model, which stays at 5.7 inches. It will have curved edges — a well-liked feature limited to a special "Edge" model before. The Note 7 will be available in the U.S. starting Aug. 19. Prices haven't been announced.

Samsung is also releasing an updated virtual-reality headset — with a dedicated home button, a wider field of view and a black interior to improve viewing. The new Gear VR will be available Aug. 19 for $100. A previously announced 360-degree camera called Gear 360 also comes out that day, for $350. As phones mature and innovation slows, VR has been one area in which gadget makers try to entice consumers.

As with past Note phones, the Note 7 comes with a stylus. It expands on a feature that lets you magnify text and images by hovering the pen over it. With the pen, people will have ways to easily create and share GIF animations.

The Note 7 also expands on a feature to give sensitive files an additional layer of security. You'll be asked for an iris scan, fingerprint or passcode to access documents you place in a Secure Folder. This way, if you're handing the phone to friends to browse pictures, you're not inadvertently giving them access to confidential work documents.

May 4th, 2017
Latest in Product Development