Polish Arms Firm in Deal with US Patriot Missile Maker

Agreement with the U.S. will name Raytheon as the probable provider of Poland's missile defense. 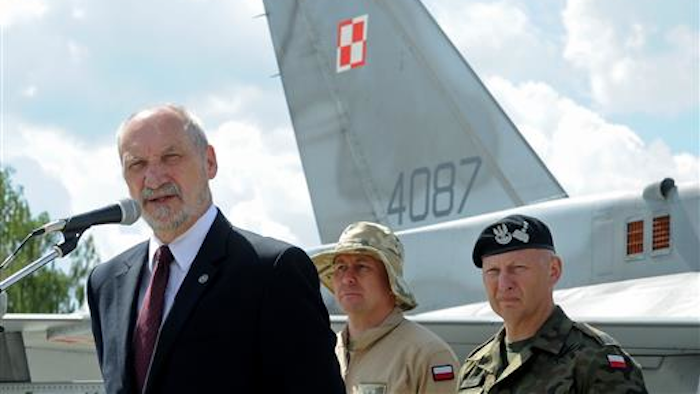 Polish Defense Minister Antoni Macierewicz speaks in front of a Polish Air Force F-16 fighter jet during a farewell ceremony of Polish soldiers leaving for Kuwait to take part in the operation Inherent Resolve , in Janow, Poland, Monday, July 4, 2016. During an interview Monday Macierewicz told The Associated Press that decisions to be approved at this week's NATO summit in Warsaw will build a force aimed at deterring any aggressive intentions by Russia against the West.
AP Photo/Alik Keplicz

The summit will decide to raise the defense of the region anxious about its security after Russia annexed Crimea in 2014.

Polish Defense Minister Antoni Macierewicz said Monday he will sign an agreement with the U.S. that will name Raytheon as the probable provider of Poland's missile defense.

The decision was taken after Raytheon agreed to spend 50 percent of the project's cost, estimated at billions of dollars (euros), on cooperation deals with the Polish defense industry.