The final descent will require careful maneuvers and offer a unique opportunity to take close-up images of the comet before the crash landing. 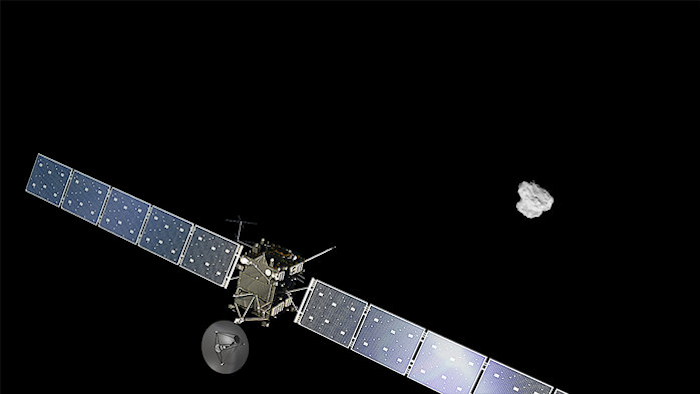 Artist impression of ESA's Rosetta approaching the comet 67P/Churyumov-Gerasimenko. The comet image was taken on August 2, 2014 by the spacecraft's navigation camera at a distance of about 500 km. The spacecraft and comet are not to scale.
ESA/ATG

BERLIN (AP) — After a journey lasting 12 years, a date has been set for the Rosetta spacecraft's final descent onto comet 67P/Churyumov-Gerasimenko.

The European Space Agency announced Thursday that the probe will crash onto the comet Sept. 30 after a 5 billion-mile (8 billion-kilometer) odyssey. It will join its sidekick Philae, the lander that touched down on the icy surface nearly two years ago.

The final descent will require careful maneuvers and offer a unique opportunity to take close-up images of the comet before Rosetta hits the ground at about 1.8 kilometers per hour (1.12 mph).

"Although we'll do the best job possible to keep Rosetta safe until then, we know from our experience of nearly two years at the comet that things may not go quite as we plan," said mission manager Patrick Martin.

"This is the ultimate challenge for our teams and for our spacecraft, and it will be a very fitting way to end the incredible and successful Rosetta mission."

After launching in 2004, Rosetta took 10 years to accelerate and catch up with 67P. In November 2014 it released Philae, achieving the first landing of a spacecraft on a comet.

Scientists decided to steer Rosetta onto 67P because it's unlikely to survive lengthy hibernation as the comet heads away from the sun toward the orbit of Jupiter, starving the probe's solar panels of light.

"We're trying to squeeze as many observations in as possible before we run out of solar power," said Matt Taylor, Rosetta project scientist.

Data from Rosetta and Philae have already improved scientists' understanding of the nature of comets and the role they played in the early universe. Analyzing the data fully is expected to keep researchers busy for years, said Taylor.