Ask many mothers and they'll tell you, pumping sucks in more than one sense of the word. 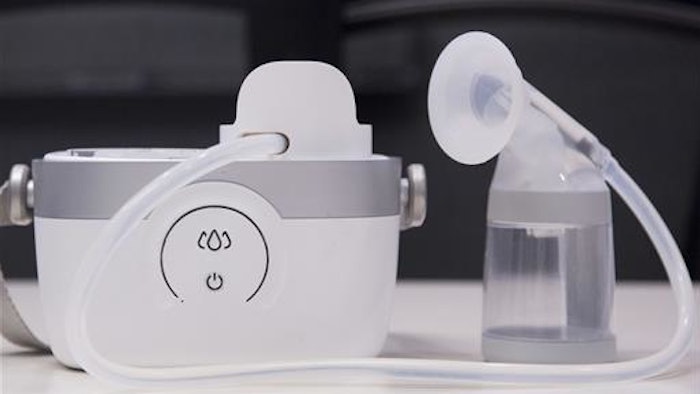 This Tuesday, June 7, 2016, photo shows Naya Health's Smart Pump, in New York. A growing number of startups want to make the breast pump more mother-friendly, using soft silicone parts or keeping their noise level down to make it easier for them to work and pump simultaneously.
AP Photo/Mark Lennihan

NEW YORK (AP) — "It feels like you are a cow. You are hooked up to a machine — it's the opposite of breastfeeding," says Nina Emlen, who works full-time in college admissions and pumps milk twice a day for her son, Asher.

Women praise the pumps for giving them the freedom to spend time away from their baby. This can mean working, working out or getting a pedicure. But the complaints are manifold: the machines use harsh plastic parts, they are noisy and cumbersome, and they require a lot of maintenance and cleaning, which challenge bleary-eyed new parents.

But a growing number of startups wants to make the breast pump more mother-friendly, using soft silicone parts or keeping their noise level down to make it easier for them to work and pump simultaneously.

It's not an easy task. Because they are considered medical devices, breast pumps sold in the U.S. must be approved by the Food and Drug Administration. The Associated Press couldn't even get one of the newest, not-yet-approved pumps to test out with nursing mothers in the newsroom due to the regulations.

And though they are now covered by most health insurance plans, any redesign has to factor in cost. There are also patents to contend with from competing companies. For the male-dominated tech industry that's working on "disrupting" everything from meal delivery to taxicabs, the idea of reinventing the breast pump has simply not been on the horizon.

In fact, most of the startups working on new pumps and accessories are parents who grew frustrated with what's on the market today. Many ideas came out of a breast pump "hackathon" held over a weekend in 2014 at the Massachusetts Institute of Technology. There were engineers, computer programmers, clinicians and others interested in fixing this problem. In all, some 150 people attended.

Pumping, for the uninitiated, generally involves many complicated steps: finding a place to do it, putting on a special pumping bra, assembling the valves, tubes, bottles and various plastic parts that attach the pump to the breasts, then the actual pumping. At best, it is uncomfortable and awkward and at worst, painful.

"I resigned myself to the fact that pumping was going to be uncomfortable," says Erin McArthur, who lives in Oshkosh, Wisconsin and exclusively pumped milk for her baby for nearly six months. "That it was something I would have to put up with if I want him to have breastmilk."

Then there's the cleaning or sterilizing, at least daily if not more, of the bottles and parts. There are nooks and crevices, and special detergents, and wipes and bottle brushes and microwave sterilizers to confound and frustrate bleary-eyed new parents.

Medela , a privately held Swiss company, started selling its best-selling pump for home-and-work use in 1991, after realizing there is a market for it beyond hospital use. Among its most important improvements is its two-phase expression technology, which mimics the way babies nurse — first, quick sucks to simulate milk production, then long gulps once the mother's milk "lets down." It started selling pumps with the technology in the early 2000s. Noting that many of today's moms are "digital natives" who like to have information at their hands, Medela also recently created an app that helps parents track their baby's activities and get help with breastfeeding.

But there is more that could be done, say parents, engineers and researchers working on the newest pump hacks.

Among the efforts to reinvent or at least improve the pump:

Janica Alvarez, whose engineer husband concocted a breast pump using a surgical glove, duct tape and other stuff he found around the house, hopes to launch the Naya Health Smart Pump later this year. Because it uses a water-based technology rather than a vacuum motor, Alvarez, who nursed all three of her sons, says it is more akin to a nursing baby.

Emlen, who has not tried the pump, said she liked the idea of using silicone rather than rigid plastic.

"Even aside from the comfort, it seems like a friendlier material," she says. "Somebody thought oh, I respect this woman who is going to be using this by giving her something soft and comfortable."