Drones on Disaster Missions Could Be Lifesaver

How to distribute lifesaving supplies quickly and safely after a natural disaster has long been a puzzle for responders. Now, drones might be the lifesaver. 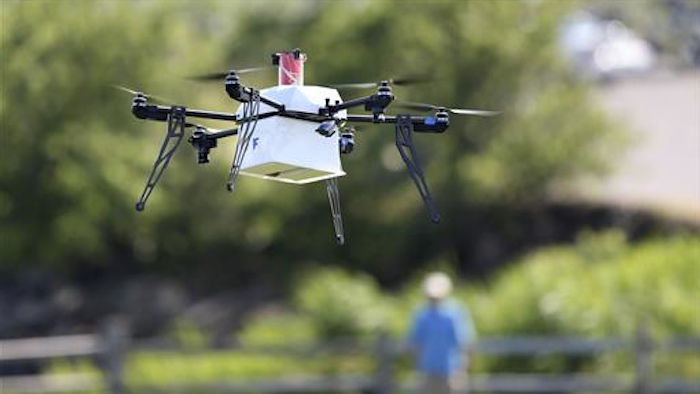 A drone aircraft with a payload of simulated blood, and other medical samples flies during a ship-to-shore delivery simulation Wednesday, June 22, 2016, in Lower Township, N.J. How to distribute lifesaving supplies quickly and safely after a natural disaster has long been a puzzle for responders. Now, drones might be the lifesaver. That idea was put to the test this week on the New Jersey coast as a drone delivery conducted test flights to help determine whether drones can be used to carry human medical samples to and from areas during major natural disasters.
AP Photo/Mel Evans

CAPE MAY, N.J. (AP) — That idea was put to the test this week in New Jersey as a drone delivery service conducted test flights to help determine whether drones can be used to carry human medical samples to and from areas that cannot be accessed or communicated with during major storms, earthquakes or other disasters.

Experts say drones are becoming a more valuable tool in many humanitarian operations, where the unmanned aircraft can be quickly launched and used to collect data and images and help locate people who may be injured or trapped. But Timothy Amukele, an assistant professor of pathology at the Johns Hopkins University School of Medicine in Baltimore, said that biological samples "are not like a shoe or a book, they are pretty fragile items."

"For example, if blood is being carried on the back of motorcycle, shaking caused by the bike and its vibrations can ruin the sample," said Amukele, a volunteer adviser to Flirtey, the company that conducted the tests in New Jersey. "We want to see what tasks the drones can perform and if the drones have similar effects on samples they carry."

About 100 people looked on as the drones flew between an onshore medical relief camp and a test facility on a vessel stationed on the Delaware Bay late Wednesday afternoon. They took medical supplies from the vessel to the medical camp, while blood and other medical specimens were flown between the sites.

The tests were done at the invitation of the Field Innovation Team, a nonprofit that works with agencies and experts from various fields to develop solutions to humanitarian disaster scenarios.

The tests came a day after the Obama administration approved the routine use of small drones by real estate agents, farmers, filmmakers and countless other commercial operators after years of struggling to write rules that would both protect public safety and free the benefits of a new technology.

The Reno, Nevada-based firm, conducted what it said was the nation's first autonomous urban drone delivery in the U.S. in March. That happened in Nevada, one of six states the Federal Aviation Administration has designated as unmanned aircraft systems test sites.

Matt Sweeny, Flirtey's chief executive, believes medical drone delivery will happen "more quickly than people realize," possibly within the next three years. He says such a service could potentially help hundreds of thousands of people, noting the number of residents impacted by recent disasters such as Superstorm Sandy, which struck near the site where the tests were conducted.

Eight of the world's 10 largest cities are coastal communities, and more than three billion people — or 44 percent of the world's population — live within 95 miles of the coast, according to the United Nations.

Amukele believes it will probably take about five years before drones are used regularly in disaster situations. He notes that roughly 59 nations currently have drone regulations, so responders will need to know what rules other countries will put in place.

Agencies involved in humanitarian relief agree that drones have been helpful in certain humanitarian operations for collecting data and imagery where infrastructure is destroyed or was already lacking, including in the Philippines after Typhoon Haiyan in November 2013. But they also note that caution must be used in cases where humanitarian relief drones could be mistaken for military drones.

"The potential is indeed huge for drones to deliver small, life-saving packages, such as vaccines," said George Fenton, director of humanitarian innovations at World Vision International, a London-based humanitarian aid, development and advocacy organization. "The potential for confusion between military action and humanitarian work is high, and we must proceed cautiously with this relatively new technology."