But be careful, it will make your face go numb. What else did we find at the gadget show? 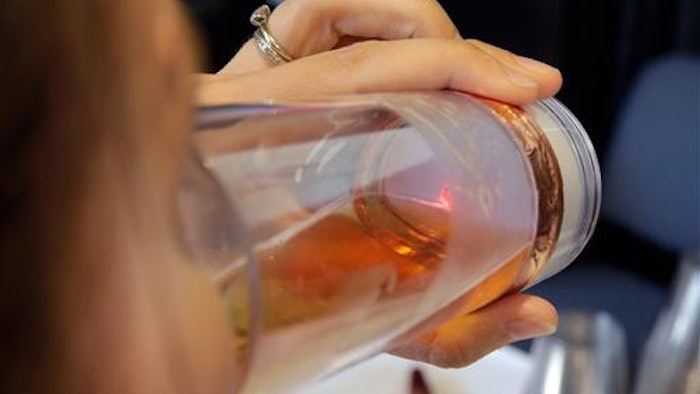 In this Wednesday, June 22, 2016, photo, the Global Ionics Beverage Power drinking device is demonstrated during a preview of products at CE Week in New York. The human body, combined with the voltage booster circuit and a single AAA battery inside the waterproof case, generates a small, safe electric current to enhance the beverage.
AP Photo/Richard Drew

NEW YORK (AP) — From a 3-D pen that lets kids safely doodle with melted plastic to an electrically charged glass that makes beer taste bubblier, there was no shortage of fun and quirky gadgets (see images in gallery) at this year's CE Week.

The annual, three-day gadget show in New York is meant as a showcase for products coming out for the holidays, though many items are still in development or seeking investments through group-fundraising sites such as Indiegogo.

Here are five notable gadgets at the show, which ends Thursday.

Global Ionics has a glass that uses a small amount of electric current to boost the flavor and fizziness of drinks, be it flavored water, fruit juice or wine.

The current is generated by one AAA battery housed in the base of the glass. The current flows from the glass through its beverage into the mouth.

During a demo, the charge gave beer a pleasant extra fizziness when taking little sips. But it can make your face numb when you drink continually. So, best not to overdo it.

This technology is still in the ideas stage. Global Ionics says it hopes to license it to a beer company or a medical-device manufacturer — for instance, to boost the effectiveness of bubbly flu treatments.

There's now a kid-safe version of the 3Doodler 3-D printing pen, which melts sticks of colored plastic into goo that shoots out of the pen tip to create 3-D sculptures. With both versions, the plastic hardens quickly, so you can draw into the air without worrying about your creation collapsing.

The kids' version has no hot parts. The plastic coming out is cool enough to touch. A kids' starter pack includes a pen, an ideas book and two packs of plastic sticks. The kid-friendly set costs $50, half the price of the regular version.

The kids' version is for ages 8 and up and will be in stores in a few months.

Finding earbuds that fit comfortably and don't fall out can be a challenge, especially for people with uniquely shaped ears.

Decibullz touts its earbuds as the first to be both custom and wireless. They are made of a plastic that softens in hot water. The putty conforms to the inside shapes of your ears and hardens in about two minutes. If you don't get it right the first time, just pop the earbuds back in hot water and start over.

And don't worry about mixing electronics and water. The buds come off the wireless headset while you're adjusting the fit.

ROXs, billed as a "real-life gaming console," is designed to get gamer kids active and away from their screens.

The kit from A-Champs comes with three ROXs, which look like flat stones about the size of a saucer. You strap them to kids, trees or just about anything else.

Kids can choose one of 10 games. "Crazy Chicken," for instance, challenges kids to race between ROXs and touch as many as they can, as fast as they can, as the gadgets beep and light up.

The starter package is expected to sell for $130 through the company's website, though you can order one now through Indiegogo for $10 less. It's expected to start shipping this fall.

GoPro cameras are great for action footage, but they don't shoot in 3-D. Fantem now has a clip-on 3-D lens for it.

Fantem's Vitrima 3-D lens costs $80 through Indiegogo. The company plans to start shipping them next month and says it's in talks to get them on store shelves.