How Mushrooms Fueled a Scientist's Flight Out of North Korea

At one point he had to trade his mushroom products for groceries. Now, a company that is starting to mass-produce and sell his products. 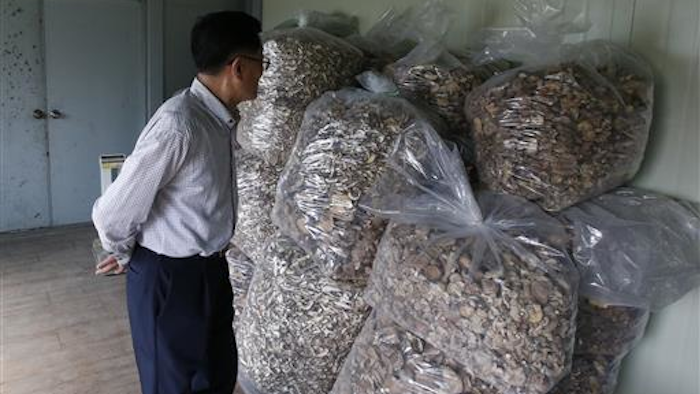 In this June 1, 2016 photo, scientist Lee T.B. who fled North Korea to South Korea, looks at packs of mushrooms at his newly-built laboratory in Hwaseong, South Korea. Lee has studied the fungi for decades and has created products with them that he believes may fight diseases including cancer, which killed his wife more than 25 years ago. He felt his work was constrained by, and ultimately even in some danger from, the North Korean government, so he fled to South Korea in 2005.
AP Photo/Lee Jin-man

HWASEONG, South Korea (AP) — Lee T.B. fled North Korea not because he suffered from dire poverty or persecution at home, as many other defectors have. He did it for mushrooms, and to fulfill his wife's dying wish.

He has studied the fungi for decades and has created products with them that he believes may fight diseases including cancer, which killed his wife more than 25 years ago. He felt his work was constrained by, and ultimately even in some danger from, the North Korean government, so he fled to South Korea in 2005.

The years since, however, held a much different array of frustrations. He says he was hoodwinked by shady businessmen, and at one point was so financially strapped that he had to trade his mushroom products for groceries. Now, finally, the 66-year-old is working for a company that is starting to mass-produce and sell his products.

"I was educated under a socialist system and didn't know how human relations, the economy and businesses operate under a capitalistic system. So some people exploited my weaknesses," Lee said in an interview in his newly built laboratory in a quiet farming village in Hwaseong, just south of Seoul. Lee requested that his given names be identified only with initials because of worry about possible reprisals against his two grown children still in the North.

Elite defectors such as Lee are rare, and his decision to abandon the North in part to pursue academic freedom in the South is even less common. Yet his struggles in the South were similar to the many North Korean defectors who report difficulty fitting in with largely affluent, ultra-competitive, well-educated South Koreans.

Lee worked as a microbiologist for North Korea's State Academy of Science, which he says received one of the largest food rations in the country. The mushrooms he studied are a traditional Korean folk remedy, with a variety of antiviral, antioxidant and cholesterol-lowering properties. Some recent studies show mushrooms may help contain the growth of tumors.

Lee was allowed the unusual opportunity of working for a Siberian mushroom institute for several years in the 1980s. But his time in what was then the Soviet Union kept him away from his family, and he returned home five days after his wife's death in 1989.

"I didn't even know she had cancer," Lee said as he wiped away tears with a handkerchief. "She did her best not to be a burden to me and my work. She was just a great person."

A Workers' Party official who was with Lee's wife when she died told Lee that she requested that her two children support their father respectfully and that Lee work on cancer prevention.

Lee said he vowed to fulfill her last wish as he sat drinking alcohol at her gravesite. "When I was there, I could only say, 'I'm sorry. I'm really sorry,'" Lee said.

Granting his wife's wish wasn't easy. Like all other scientists in North Korea, he said, his research was controlled by others. He was told to use his fungus expertise to explore how pine needles and corn might be used to develop alternative sources of food.

After the food project fell apart because of corruption and a lack of electricity at his laboratory, Lee said, North Korea faced a devastating famine believed to have killed hundreds of thousands in the 1990s.

Then, in 2000, months after he started work at an agricultural science institute in the northeastern Chinese city of Yanbian, Lee was shocked to learn that his mushroom research was being partly funded by South Koreans who had invested, without the North's knowledge, in that Chinese organization. There would be serious consequences if Pyongyang discovered that archrival Seoul was funding the project.

Lee disobeyed an order to return home. He had always felt constrained by academic rules in the North; now he was also afraid of possible punishment. So he moved around China and continued his mushroom research. He said he was often surprised by the abundance of food in China, and by positive news on South Korea.

In 2005 he flew to South Korea with the help of South Korean officials so he could dedicate himself to mushroom studies among other Koreans. He's among about 29,000 North Koreans who have defected to South Korea since the end of the 1950-1953 Korean War.

In South Korea, Lee acquired six mushroom-related patents and developed products that he says will strengthen people's immune systems to help them fight cancer, diabetes, hay fever and other health problems. He extracts mycelia — tiny hair-like root structures — from a number of mushroom species, then lets them grow together in a lab before drying the result and crushing it into powder.

In 2008, a six-month test showed that mushroom products developed by Lee and given to rats suppressed the growth of cancer cells implanted in the animals, said Chun Kyung-Hee, a professor at Yonsei University College of Medicine in Seoul. Chun, who worked for the state-run National Cancer Center at the time of the test, said her experiments were conducted independently in her laboratory and that she has never been connected to Lee's research or business. The work has not been published or peer-reviewed.

Lee faced years of problems bringing his products to market.

After working for a pharmaceutical company in South Korea, Lee in 2010 partnered with a South Korean businessman who he said agreed to sell his products and share the profits with him. That deal collapsed in 2012 after Lee accused his partner of cheating him.

Lee also said he was deceived by "tricksters" but refused to elaborate.

Lee's financial troubles eventually became so serious that, with help from fellow defectors, he traded his mushroom products for rice, radishes, Chinese cabbages and other food.

Earlier this year, South Korean businessmen contacted him after seeing a blog post about his mushroom products. They founded the Seoul-based Aleph BioChem after Lee decided to work with them.

Company officials said they've already signed about $430,000 worth of contracts to supply several businesses with Lee's previous mushroom products. They plan to roll out new products in coming weeks.

Lee said his technique for mycelia-mixing can boost mushrooms' medicinal effectiveness as they interact with each other.

Some fungi experts reached by The Associated Press said that while mushrooms have some health-boosting qualities, mixing mycelia from different kinds of mushrooms is an unusual, difficult technology. They questioned whether cultivated mycelia would have better medical properties than the mushrooms themselves. Lee declined to disclose details about his mycelia-mixing technology.

Woo Ho, a Korean traditional herbal medicine doctor, said he's bought and given Lee's mushroom products to 400 of his patients suffering from hay fever, asthma, enteritis, gout and other diseases since October. Woo, who is not linked to Lee's business or research, said many of them reported that their health problems have eased, particularly those with hay fever.

On a recent day at his new laboratory in Hwaseong, Lee worked with two fellow defectors among electrical wiring systems that weren't yet installed and empty shelves. Fungi were everywhere. In jars on a table were also moldy garlic, Jerusalem artichoke and peanuts along with a soccer-ball-sized chaga mushroom. Lee said he was experimenting with adding mushroom mycelia to these foods.

He wonders if his products could have saved his wife's life if he had been able to make them decades ago in North Korea.

"I still think about her when things get quiet," said Lee, who has not remarried. "I'm now concentrating all my efforts on trying to prevent people from getting cancer."

Next, digital telepathy and immortality.
Feb 23rd, 2021
Follow Us
Most Recent