China's Supercomputer is Fastest in the World

It's a new milestone for Chinese development and a further erosion of past U.S. dominance. 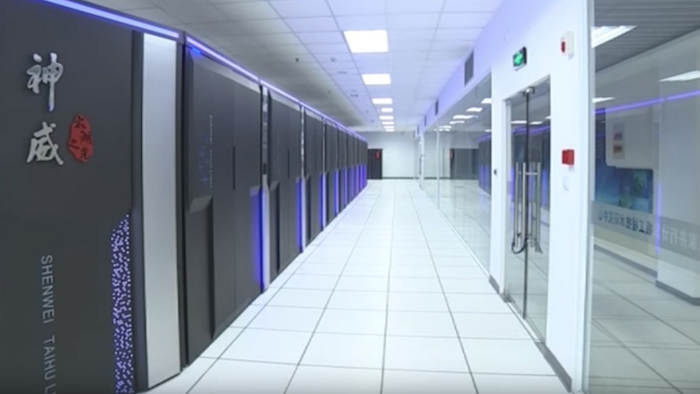 This year's champion is the Sunway TaihuLight at the National Supercomputing Center in Wuxi, west of Shanghai.
YouTube, CCTV+

BEIJING (AP) — A Chinese supercomputer has topped a list of the world's fastest computers for the seventh straight year — and for the first time the winner uses only Chinese-designed processors instead of U.S. technology.

The announcement Monday is a new milestone for Chinese supercomputer development and a further erosion of past U.S. dominance of the field.

Last year's Chinese winner in the TOP500 ranking maintained by researchers in the United States and Germany slipped to No. 2, followed by a computer at the U.S. government's Oak Ridge National Laboratory in Tennessee.

Supercomputers are one of a series of technologies targeted by China's ruling Communist Party for development and have received heavy financial support. Such systems are used for weather forecasting, designing nuclear weapons, analyzing oilfields and other specialized purposes.

"Considering that just 10 years ago, China claimed a mere 28 systems on the list, with none ranked in the top 30, the nation has come further and faster than any other country in the history of supercomputing," the TOP500 organizers said in a statement.

This year's champion is the Sunway TaihuLight at the National Supercomputing Center in Wuxi, west of Shanghai, according to TOP500. It was developed by China's National Research Center of Parallel Computer Engineering & Technology using entirely Chinese-designed processors.

The TaihuLight is capable of 93 petaflops, or quadrillion calculations per second, according to TOP500. It is intended for use in engineering and research including climate, weather, life sciences, advanced manufacturing and data analytics.

Its top speed is about five times that of Oak Ridge's Titan, which uses Cray, NVIDIA and Opteron technology.

Other countries with computers in the Top 10 were Japan, Switzerland, Germany and Saudi Arabia.

The TaihuLight is due to be introduced Tuesday at the International Supercomputing Conference in Frankfurt by the director of the Wuxi center, Guangwen Yang.

"As the first No. 1 system of China that is completely based on homegrown processors, the Sunway TaihuLight system demonstrates the significant progress that China has made in the domain of designing and manufacturing large-scale computation systems," Yang was quoted as saying in the TOP500 statement.

The TaihuLight uses Chinese-developed ShenWei processors, "ending any remaining speculation that China would have to rely on Western technology to compete effectively in the upper echelons of supercomputing," TOP500 said in a statement.

The second-fastest computer, the Tianhe-2 at the National Supercomputer Center in the southern city of Guangzhou, is capable of 33 petaflops. It uses chips made by Intel Corp.

Among countries with the most computers on the top 500 list, Germany was in fourth place with 26 systems, France was next with 18, followed by Britain with 12.

The TOP500 is compiled by Erich Strohmaier of NERSC/Lawrence Berkeley National Laboratory, Jack Dongarra of the University of Tennessee, Knoxville, Horst Simon of NERSC/Lawrence Berkeley National Laboratory, and Martin Meuer of Prometeus GmbH, a German technology company. Another contributor, Hans Meuer of Germany's University of Mannheim, died in 2014.