Yahoo hopes to auction more than half of its technology patents. Analysts think they're worth $1 billion. 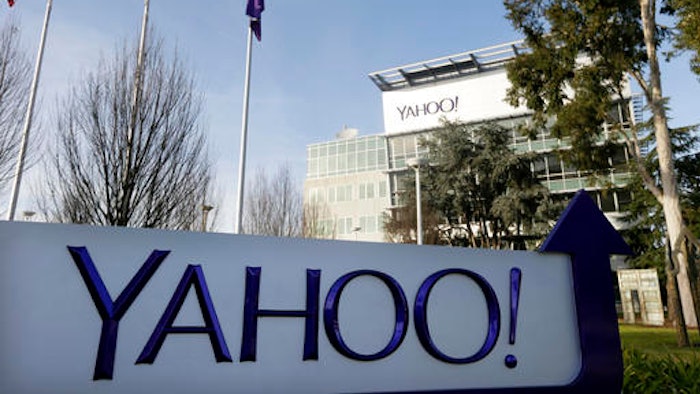 This Jan. 14, 2015, file photo shows a sign outside Yahoo's headquarters in Sunnyvale, Calif. Yahoo is hoping to sell most of its technology patents as part of a purge that also could culminate in the sale of its Internet operations.
AP Photo/Marcio Jose Sanchez, File

SUNNYVALE, Calif. (AP) — Yahoo is hoping to auction off most of its technology patents as part of a purge that also could culminate in the sale of its internet operations.

More than 3,000 patents that have already been issued or are under approval review are on the sales block. The Sunnyvale, California, company says it hasn't set a minimum bid for the patent portfolio that it calls "Excalibur."

Analysts have estimated that Yahoo Inc.'s patents are worth more than $1 billion.

Yahoo says it intends to retain more than 2,000 other patents that have been issued or awaiting approval in the U.S. and abroad.

The patent auction comes at the same time that Yahoo is weighing offers for Internet operations that include its email service and digital sports, finance and news sections.

A report published earlier this week by The Wall Street Journal said Verizon Communications has offered $3 billion for Yahoo's Internet operations, below the $4.4 billion that it paid to acquire AOL last year. The report, which cited an unidentified person familiar with the negotiations, said Verizon isn't interested in owning Yahoo's real estate or patents.

Yahoo is considering selling off almost everything it owns except its lucrative stakes in China's Alibaba Group and Yahoo Japan because its own revenue has been crumbling for the past decade. The company hoped to bounce back when it hired former Google executive Marissa Mayer as its CEO nearly four years ago, but instead things have gotten worse.

If Yahoo decides to hold on to its slumping internet operations, Mayer has vowed to boost revenue by selling more mobile ads while she also slashes costs to increase the company's profits. Yahoo's internet operations would be spun off into a newly formed company, probably sometime next year, under Mayer's latest turnaround plan.

Yahoo hasn't set a timetable for deciding to sell or not. Many analysts expect the choice to be made by the company's annual shareholder meeting, which is scheduled to be held June 30.