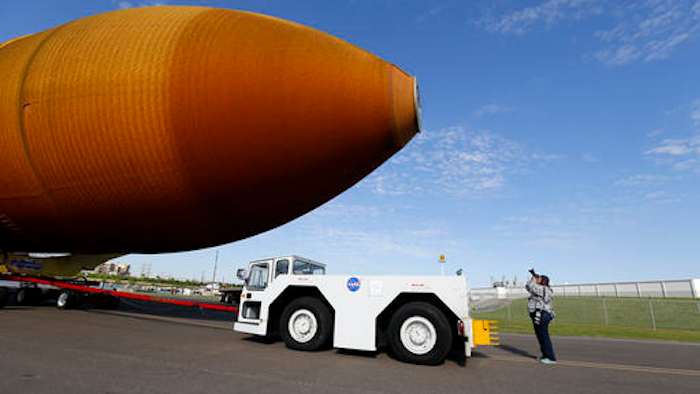 In this Sunday, April 10, 2016 file photo, external Tank, ET- 94, NASA's only remaining space shuttle external tank, is transported by trailer to a dock at the NASA Michoud Assembly Facility in New Orleans. The tank is embarking on a journey, via the Gulf of Mexico and the Panama Canal, to the California Science Center in Los Angeles, as part of the Space Shuttle Endeavour display. The tank ET-94 is scheduled to arrive Wednesday, May 18, 2016, in Los Angeles and then head later in the week to the science center.
AP Photo/Gerald Herbert

LOS ANGELES (AP) — NASA is sending its last space shuttle external propellant tank to Los Angeles to join the retired orbiter Endeavour on display at the California Science Center. The plan is to mount the winged spaceship vertically on the massive tank as if ready for launch, complete with a real pair of solid rocket boosters.

The tank is set to arrive in Los Angeles on Wednesday, after a trip that took it from a space agency facility in Louisiana, through the Gulf of Mexico and the Panama Canal, and up the Pacific Coast of Mexico.

External tanks have long played a critical role in the heady ere of space exploration.

Known as ET-94, the tank is massive: 154 feet long, 27.5 feet in diameter and weighs 65,000 pounds empty. Tanks not only carried propellant but served as the core of the launch system's architecture. A shuttle — also referred to as an orbiter — would be mounted on the side of a tank, along with two solid-fuel rocket motors.

Inside the tank are two internal tanks — one for liquid oxygen and a much larger one for liquid hydrogen (held at minus-423 degrees) — the propellants that fed a space shuttle's three main engines. Another structure connects those tanks and houses other equipment. The total weight of the propellants used for launch exceeded 1.6 million pounds.

The tank's surface is covered with a layer of sprayed-on foam designed to keep the propellants at the proper temperature, reduce the formation of ice and to provide protection from heat as it sped through the atmosphere.

The operational life of an external tank was short. At liftoff, the powerful thrust of the solid rocket boosters was necessary to help the shuttle get moving toward orbit.

Within a few minutes, the boosters would fall away from the tank and parachute into the Atlantic for recovery and reuse. Meanwhile, the shuttle's main engines gulped thousands of gallons of fuel as the shuttle gained enough speed to enter orbit — more than 17,000 mph.

In little more than eight minutes and 70 miles above the Earth, the tank's job would be done, detaching from the orbiter and falling away on a planned trajectory over an ocean. Unlike the boosters, the tank would almost entirely burn up in the atmosphere.

ET-94 is the last flight-qualified external tank. NASA ordered it for a mission that would have been flown by the shuttle Columbia, which disintegrated over Texas as it was returning from a mission, killing its crew of seven.

An investigation found that foam fell off that mission's external tank during launch and punched a hole into a wing, allowing hot gases of the fiery re-entry inside the structure. Investigators used many pieces of foam from ET-94 in tests to come to the conclusion.

The invention could provide a new option to use directed energy for biomedical and defense applications.
Apr 8th, 2021
Follow Us
Most Recent