The researchers hope the new claw will capture the interest of NASA or SpaceX for future trips to Mars. 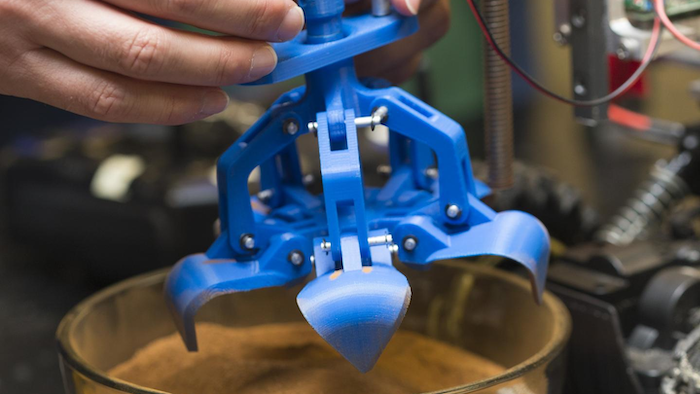 The sea urchin's intricate mouth and teeth are the model for a claw-like device developed by a team of engineers and marine biologists at the University of California, San Diego to sample sediments on other planets, such as Mars.
Jacobs School of Engineering/UC San Diego

The sea urchin's intricate mouth and teeth are the model for a claw-like device developed by a team of engineers and marine biologists at the University of California, San Diego to sample sediments on other planets, such as Mars.

The researchers detail their work in a recent issue of the Journal of Visualized Experiments.

The urchin's mouthpiece was first described in detail by the Greek philosopher Aristotle, earning it the nickname "Aristotle's lantern." It is comprised of an intricate framework of muscles and five curved teeth with triangle-shaped tips that can scrape, cut, chew and bore holes into the toughest rocks--a colony of sea urchins can destroy an entire kelp forest by churning through rock and uprooting seaweed.

The teeth are arranged in a dome-like formation that opens outwards and closes inwards in a smooth motion, similar to a claw in an arcade prize-grabbing machine.

The urchin's extraordinary ability to rip through rock could translate to a good sediment sampler for space vehicles like the Mars rovers, which currently use shovels to collect ground samples, said Michael Frank, a Ph.D. candidate at the Jacobs School of Engineering at UC San Diego and the paper's first author.

"Our goal was a bioinspired device that's more precise and efficient at grabbing ground samples from different areas, and won't disturb the surrounding area like a shovel would," he said.

Frank is part of a research group that uses engineering to explain biological structures and then designs bio-inspired devices based on what they find.

Led by mechanical engineering professor Joanna McKittrick, the group has applied this approach to exploring natural structures in seahorses, boxfish, porcupines, woodpeckers, porcupine fish and many other animals.

In this paper, one finding was the importance of a T-shaped structure running down the middle of each of the urchin's teeth, called the keel.

Simulations show that teeth with keels experienced 16 percent less stress than teeth without keels when subjected to a 10lb-load. Researchers also noted that adding the keel increases the mass of the tooth by only 4 percent.

Bio-inspiration for the study came from pink sea urchins (Strongylocentrotus fragilis), which live off the West Coast of North America, at depths ranging from 100 to 1000 meters in the Pacific Ocean.

The urchins were collected for scientific research by the Scripps Institution of Oceanography at UC San Diego.

Researchers extracted the urchins' mouthpieces, scanned them with microCT, essentially a 3D microscopy technique, and analyzed the structures at the National Center for Microscopy and Imaging Research at the School of Medicine at UC San Diego.

This allowed engineers to build a highly accurate model of the mouthpiece's geometry.

Researchers also used finite element analysis to investigate the structure of the teeth, a method that allowed them to determine the importance of the keel to the teeth's performance.

Engineers then turned the microCT data into a user-friendly file that a team of undergraduate engineering students at UC San Diego used to start iterating prototypes of the claw-like device, under the supervision of Ph.D. students in McKittrick's lab.

The first iteration was very close to the mouthpiece's natural structure, but didn't do a very good job at grasping sand. In the second iteration, students flattened the pointed end of the teeth so the device would scoop up sand better. But the device wasn't opening quite right.

Finally, on the third iteration, they connected the teeth differently to the rest of the device, which allowed it to open much easier. The students were able to quickly modify each prototype by using 3D printers in the UC San Diego Design Studio.

The device was then attached to a remote-controlled small rover. The researchers first tested the claw on beach sand, where it performed well. They then used the claw on sand that simulates Martian soil in density and humidity (or lack thereof).

The device was able to scoop up sand efficiently.

Researchers envision a fleet of mini rovers equipped with the claw that could be deployed to collect samples and bring them back to a main rover. Frank hopes that this design will be of interest to NASA and SpaceX.

Tooth Sensors Track What You Eat