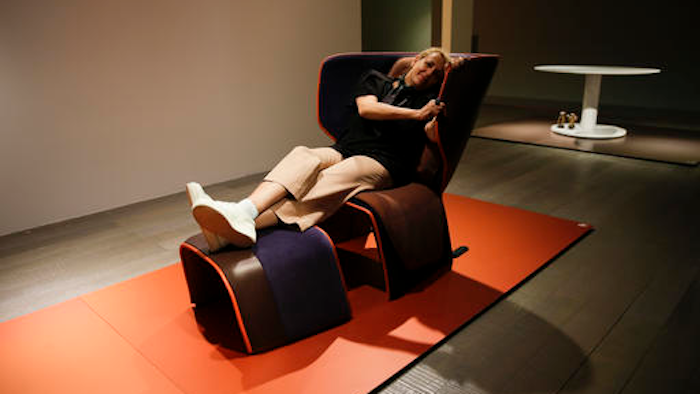 In this April 11, 2016 photo, Spanish designer Patricia Urquiola is lying on a chair called "Gender," during an interview with the Associated Press, at the Cassina space, part of the Design Fair exhibition, in Milan, Italy.
AP Photo/Luca Bruno

MILAN (AP) — Big Italian furniture brands turned out collections at the 55th Milan Furniture Fair that included forgotten or neglected treasures from their archives, along with fresh innovations by the "starchitects" who have infused design with glamour.

A record 372,000 people attended the premier event for Italian design and furnishings that ended Sunday. It featured more than 2,400 exhibitors at the Rho fairgrounds and spilled out into eight design districts in Milan's city center. The annual gathering highlights the prowess of Italy's furniture manufacturing sector, which last year reported a 3 percent increase of revenues to nearly 25 billion euros ($28 billion).

Patricia Urquiola, who was named Cassina's new art director in September, is doing it all: launching her own designs while curating new works from colleagues, and updating the Italian brand's iconic pieces ahead of its 90th anniversary next year.

Urquiola said she has brought a more feminine influence to the Cassina DNA, which "has always been very masculine, very architectural."

She started with a new armchair called "Gender," which she described as her "manifesto piece." It combines two elements: a ridged, high-back form that embraces the occupant with a more cartilaginous, adjustable headrest and a fitted cushioned "dress." The chair can be paired with an inverted U-shaped ottoman.

"I think it is time to stop the argument of gender. We need more blended gender," she said.

For her debut collection, Urquiola also revisited a steel-supported table designed by Carlo Scarpa in 1968, making it from anodized aluminum in strong shades including copper and matte red to lighten the impact. The table in the central Milan showroom featured a clear glass top, but it's also available in white or black marble.

"Now the table is much lighter," she said. "Evolution means to take care of things and make them new."

Taiwan-based architect Shi-Chieh Lu adapted the traditional yoke-back Ming chair popular in China for Poltrona Frau, as the Italian brand infuses its collection with a taste of the Orient.

While the Ming chair has traditionally been crafted from wood, the "Ming's Heart" design for Poltrona Frau takes its European cues from the leather styling. The distinctive geometric back and seat are suspended from the tubular frame, creating the sensation of a swing.

"It gives the idea of floating in the air," Shi-Chieh said.

The Ming chair is among a series of pieces commissioned by Asian designers this year that merge with Poltrona Frau's iconic pieces and contemporary design.

"I think that Frau is recognizable beyond the fact of whether a designer is from Taiwan or from Milan, because identity is something you create through the construction, the way of working the leather, and the stitching," said Marco Romanelli, who is in charge of reviving the brand's icons. "It is like saying the brand is strong enough to absorb the work of people who come from any part of the world."

Leave it to Knoll to provide the essential chair update.

The U.S. brand has made some of the world's most distinctive, enduring chair designs, including Ludwig Mies van der Rohe's Barcelona chair. "The chair is an intricate question," allowed Benjamin Pardo, Knoll's design director, recalling the 70 series executive seating collection that marked the brand's entry into the European market in the mid-20th century.

Knoll's latest entry to the world of side dining seating, designed by Marc Krusin, arches comfortably around the occupant and features a functional horizontal aperture between the seat and the back that is both appealing to the eye and allows for easing lifting.

Keeping the focus on seating, Piero Lissoni designed a new rail-based sofa system, a trend in the sector, allowing combinations of softer seating with tables on the same base. Dubbed "Avio," the Knoll system evokes a sense of floating, and has the interior-design advantage of not being either left- or right-handed.

"It is intended to be a sofa that one can sit up and have a great conversation in, and also take a really great nap in," Pardo said.

The bronze base of round, arched coffee tables provided a fitting thematic counterpoint to frescoes of fierce war scenes in the living room of the brand's 18th century palazzo showroom. They were harmonized with velvet seating.

Bottega Veneta launched its home line in 2006, and as with other design houses, it is a growing part of the portfolio. This year's collection featured updates on tableware, including porcelain dishes and flatware imprinted with Bottega's distinguishing weave pattern.

Maier also finds cross-overs from his ready-to-wear looks. A leopard pattern on a chair appeared on the runway last season, while platinum boxes with semi-precious stone was inspired by Bottega Veneta's stone-inlaid sterling silver jewelry.