Miniature fuel cell generates electricity from urine at less than $3 per device. 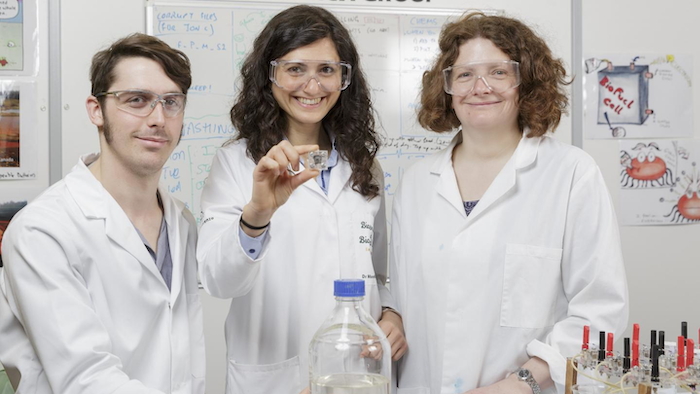 Researchers at the University of Bath have developed an innovative miniature fuel cell that can generate electricity from urine, creating an affordable, renewable and carbon-neutral way of generating power.

In the near future this device could provide a means of generating much needed electricity to remote areas at very little cost, each device costs just £1-£2 ($1.43-$2.85). With growing global pressures to reduce reliance on fossil fuels and the associated greenhouse gas emissions, microbial fuel cells could be an exciting alternative.

A microbial fuel cell is a device that uses natural biological processes of 'electric' bacteria to turn organic matter, such as urine, into electricity. These fuel cells are efficient and relatively cheap to run, and produce nearly zero waste compared to other methods of electricity generation.

In practice, urine will pass through the microbial fuel cell for the reaction to happen. From here, electricity is generated by the bacteria which can then be stored or used to directly power electrical devices.

The research team from the University's Department of Chemical Engineering, Department of Chemistry and the Centre for Sustainable Chemical Technologies (CSCT), have worked with Queen Mary University of London and the Bristol Bioenergy Centre, to devise this new kind of microbial fuel cell that is smaller, more powerful and cheaper than other similar devices.

This novel fuel cell developed by the researchers, measures one inch squared in size and uses a carbon catalyst at the cathode which is derived from glucose and ovalbumin, a protein found in egg white. This biomass-derived catalyst is a renewable and much cheaper alternative to platinum, commonly used in other microbial fuel cells.

The researchers worked on the cell's design to maximize the power that could be generated. By increasing the cell's electrodes from 4mm to 8mm, the power output was increased tenfold. Furthermore, by stacking multiple units together, the power was proportionally increased.

Currently, a single microbial fuel cell can generate 2 Watts per cubic metre, enough to power a device such as a mobile phone. Whilst this value is not comparable with other alternative technologies such as hydrogen or solar fuel cells and other methods of bioenergy digesters, the significant advantage of this technology is its extremely cheap production cost and its use of waste as a fuel, a fuel that will never run out and does not produce harmful gasses.

The research team is now looking at ways of improving the power output of the microbial fuel cell and is confident that by optimising the design of the cell, they will be able to increase the cell's performance.

Lecturer in the University of Bath's Department of Chemical Engineering and corresponding author, Dr Mirella Di Lorenzo, said: "If we can harness the potential power of this human waste, we could revolutionise how electricity is generated.

"Microbial fuel cells can play an important role in addressing the triple challenge of finding solutions that support secure, affordable, and environmentally sensitive energy, known as the 'energy trilemma'.

"There is no single solution to this 'energy trilemma' apart from taking full advantage of available indigenous resources, which include urine."

"To have created technology that can potentially transform the lives of poor people who don't have access to, or cannot afford electricity, is an exciting prospect. I hope this will enable those in need to enjoy a better quality of life as a result of our research."

Head of the Department of Chemical Engineering and Co-Director of CSCT, Dr Tim Mays, added: "Renewable 'pee-power' is a brilliant idea and its use in developing countries will have huge positive impact on people's lives in areas of energy poverty. Dr Mirella Di Lorenzo, her PhD student Jon Chouler and their research collaborators must be congratulated on the innovative science and engineering that has led to this exciting development."