"This is a significant milestone for electronic warfare," says Raytheon president. 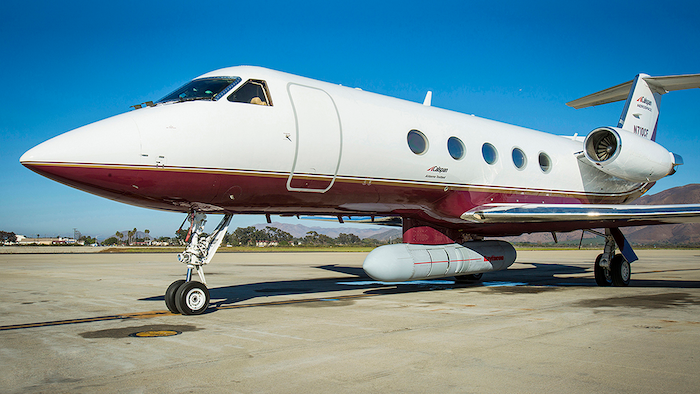 A Gulfstream business jet is fitted prototype of Raytheon’s Next Generation Jammer mounted beneath it.
Jim Haseltine/High-G Productions

The NGJ contract, awarded in the second quarter and announced on April 13th, also covers designing and delivering simulators and prime hardware to government labs and support for flight testing and government system integration.

"This is a significant milestone for electronic warfare," said Rick Yuse, president of Raytheon Space and Airborne Systems. "NGJ is a smart pod that provides today's most advanced electronic attack technology, one that can easily be adapted to changing threat environments. That level of sophistication provides our warfighters with the technological advantage required to successfully prosecute their mission and return home safely."

Raytheon designed the NGJ not only to meet today's U.S. Navy electronic warfare mission requirements, but to provide a cost-effective, open systems architecture for future upgrades.

"This is a major step forward in electronic warfare," said Travis Slocumb, vice president of Electronic Warfare Systems for Raytheon Space and Airborne Systems. "The Next Generation Jammer provides the U.S. Navy with leading edge capabilities that put the future of advanced EW in their hands."

The U.S. Navy successfully completed Milestone B for the program, allowing NGJ to move to the EMD phase. Under Secretary of Defense for Acquisition, Technology and Logistics Frank Kendall and other program officials made the decision to move forward at a meeting held at Raytheon's El Segundo, California facility, in March.

"The U.S. Navy and our industry team worked closely together during the past two years to ensure we are executing the program to plan and on budget," said Dan Theisen, director of Airborne Electronic Attack programs for Raytheon Space and Airborne Systems. "This commitment and disciplined approach will continue during EMD."