CEO Elon Musk introduced prototype versions of the car Thursday night and, at a starting price of $35,000, it's the lowest-priced car Tesla has ever made. 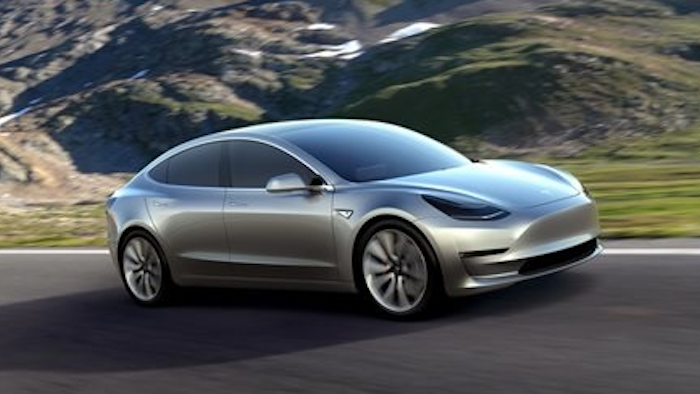 DETROIT (AP) — The Latest on the unveiling of Tesla's new Model 3, a lower-priced sedan (all times local):

It has a panoramic glass roof and semi-autonomous features like automatic lane changing and lane-keeping. Musk says it will go at least 215 miles on an electric charge.

To support Model 3 sales, Musk says Tesla plans to double the number of stores it has worldwide to 441 by the end of next year. It also plans to double its fast-charging stations to 7,200.

The promise of an affordable electric car from Tesla Motors had hundreds of people lining up to reserve one.

Tesla planned to unveil its Model 3 Thursday night at its Los Angeles design studio. It doesn't go on sale until late 2017, but potential buyers could reserve one with a $1,000 deposit at Tesla stores starting Thursday morning.

Long lines, reminiscent of the crowds at Apple stores for early models of the iPhone, were reported from Hong Kong to Austin, Texas, to Washington.

At a starting price of $35,000 — before federal and state government incentives — the Model 3 is less than half the cost of Tesla's previous models. The car is expected to have a range of at least 200 miles when fully charged, about double what drivers get from competitors in its price range, such as the Nissan Leaf and BMW i3.