The Navy is paying for research into an app to screen for autism in the hopes that it could eventually be tweaked to look for signs of post-traumatic stress disorder. 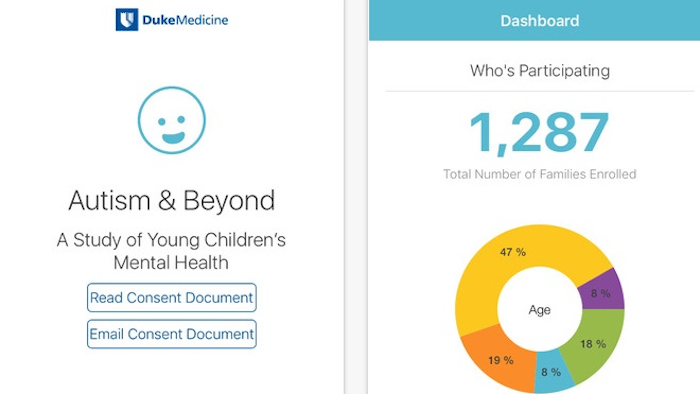 The Autism & Beyond app uses a smartphone camera and an algorithm to read children's facial expressions and assess their emotional responses.
Duke Medicine

While developmental and trauma disorders might at first appear strange bedfellows, the researchers and a PTSD expert for the VA say it could be an exciting new direction.

Facial expressions can indicate the presence of autism, PTSD and other disorders. The Autism & Beyond app uses a smartphone camera and an algorithm to read children's facial expressions and assess their emotional responses.

The app, which uses a general algorithm, could be expanded to PTSD to monitor people over time if speech and other signals are taken into account, according to Pedja Neskovic, who oversees the project in the Office of Naval Research.

"It can find patterns, not just in facial expressions but in different kinds of data sets, such as brain signals and speech, and it can be used on a continuous basis," he said. "It's a completely new world."

William Unger, a PTSD expert and clinical psychologist at the Providence VA Medical Center, sees potential for an app to be used to help screen for PTSD if it can prove reliable for a large population over time. It's always good to have additional tools, he said.

"This is a technology in its infancy. You don't know where it will go," he said. "So does this science and this study really then lead to additional questions, additional technological developments which help us to move forward? It very well may. So I'm very excited, even though I'm saying it's very far off from having utility."

M. David Rudd, an expert in suicide prevention and PTSD in military personnel, is skeptical. Rudd said he can't see the extrapolation to PTSD, calling it "a pretty big gap to leap." He worries about an app rendering erroneous results, a concern Unger also expressed.

"It's the introduction of technology where technology is not particularly needed and not particularly useful," said Rudd, president of the University of Memphis. "As a society, this is what we do. It's kind of the medicalization of a problem that's emotional and interpersonal in nature. I just don't get it."

The Navy has been working with the researcher who developed the algorithm for the app, Guillermo Sapiro, for about 20 years, supporting his research on image processing and data analysis. The Navy has invested hundreds of thousands of dollars in the app, Neskovic said.

PTSD often goes undiagnosed. Patients may not recognize the link between their symptoms and a traumatic event they experienced or may not be willing to talk about that event, while sometimes symptoms are obscured by other issues, according to research published by the American Academy of Family Physicians.

Some veterans don't want to feel like there's something wrong with them and try to cope on their own, Unger said.

The app, as it's designed for autism, shows funny videos designed to make children smile, laugh or express emotions. The way their head, lips, eyes and nose move is recorded, encoded and analyzed with the camera and app. If a child isn't responding, that's also classified.

Duke University is studying whether it's feasible for caregivers to screen kids for autism using a mobile phone at home. The app can be downloaded for free.

Unlike a tool like WebMD, where the user needs to identify their symptoms and know the right questions to ask, the app does the behavior analysis automatically. The user just has to watch the videos, said Sapiro, an electrical engineering professor at Duke. He stressed that the app isn't meant to replace specialists; it's a pre-screening tool.

The institutional review board at Duke approved the research. The initial results show that people are willing to use the app and they're sending high-quality, usable videos, Sapiro added.

Neskovic and Sapiro envision developing a PTSD app within five years. They're investigating whether it could also possibly reveal signs of mild traumatic brain injury and depression.