According to Musk, the company never expected to nail the landing. 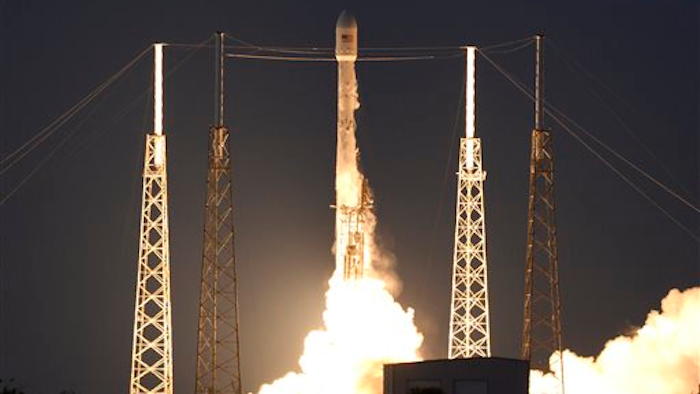 SpaceX has another launch under its belt, but not another rocket landing.

The leftover first-stage booster hit the floating platform hard Friday, said SpaceX chief Elon Musk. The company never expected to nail this landing, he said, because of the faster speed of the booster that was required to deliver the satellite to an extra-high orbit.

SpaceX scored a rocket landing on the ground at Cape Canaveral in December, but has yet to nail a trickier barge landing at sea.

The good news, though, is that the unmanned Falcon 9 rocket successfully hoisted the broadcasting satellite for Luxembourg-based company SES.

It was the fifth launch attempt over the past 1½ weeks; Sunday's try ended with an engine shutdown a split second before liftoff. Friday's sunset launch provided a stunning treat along the coast.

As it has tried a handful of times before, SpaceX attempted to land the discarded first-stage booster on a barge, this time 400 miles off the coast of Cape Canaveral.

Right before touchdown, 10 minutes into the flight, the TV camera on the platform cut out, drawing loud groans from the crowd gathered at company headquarters in Hawthorne, California.

"Didn't expect this one to work (v hot reentry), but next flight has a good chance," Musk later reported via Twitter — more than an hour after liftoff.

This mission required that the booster fly much faster than usual and therefore burn up more fuel, leaving less for a precision touchdown.

Musk said the target altitude of 40,600 kilometers — more than 25,000 miles — was achieved. "Thanks @SES_Satellites for riding on Falcon 9! Looking forward to future missions," he tweeted.

Musk wants to retrieve and refly boosters to save time and money. Usually, the boosters just fall into the sea. SES chief technology officer Martin Halliwell said last week that his company would have "no problem" launching a satellite on a recycled SpaceX rocket.

SpaceX is working to recover from a launch accident last summer shortly after liftoff. It hopes to resume space station deliveries for NASA in the next month or so.