One of the Lexus SUVs the company has outfitted with sensors and cameras hit the side of the bus near the company's headquarters. 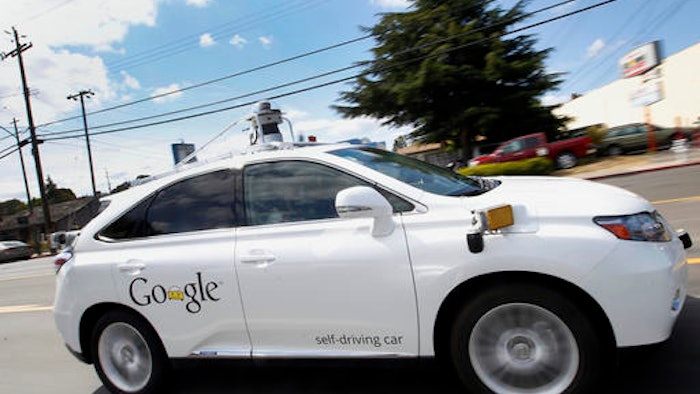 In this May 13, 2015, file photo, Google's self-driving Lexus car drives along street during a demonstration at Google campus in Mountain View, Calif. A self-driving car being tested by Google struck a public bus on a city street, a fender-bender that appears to be the first time one of the tech company's vehicles caused an accident. The collision occurred on Valentine's Day and Google reported it to California's Department of Motor Vehicles in an accident report that the agency posted Monday, Feb. 29.
AP Photo/Tony Avelar

A self-driving car being tested by Google struck a public bus on a Silicon Valley street, a minor accident that appears to be the first time one of the tech company's vehicles caused a crash during testing.

Google accepted at least some responsibility for the collision, which occurred on Feb. 14 when one of the Lexus SUVs it has outfitted with sensors and cameras hit the side of the bus near the company's headquarters in Mountain View, California.

No one was injured, according to an accident report Google wrote and submitted to the California Department of Motor Vehicles. It was posted online Monday.

According to the report, Google's car intended to turn right off a major boulevard when it detected sandbags around a storm drain at the intersection.

The right lane was wide enough to let some cars turn and others go straight, but the Lexus needed to slide to its left within the right lane to get around the obstruction.

The Lexus was going 2 mph (3 kph) when it made the move and its left front struck the right side of the bus, which was going straight at 15 mph (24 kph).

The car's test driver — who under state law must be in the front seat to grab the wheel when needed — thought the bus would yield and did not have control before the collision, Google said.

While the report does not address fault, Google said in a written statement, "We clearly bear some responsibility, because if our car hadn't moved there wouldn't have been a collision."

Chris Urmson, the head of Google's self-driving car project, said in a brief interview that he believes the Lexus was moving before the bus started to pass.

"We saw the bus, we tracked the bus, we thought the bus was going to slow down, we started to pull out, there was some momentum involved," Urmson told The Associated Press.

He acknowledged that Google's car did have some responsibility but said it was "not black and white."

The Santa Clara Valley Transportation Authority said none of the 15 passengers or the driver of the bus was injured.

The transit agency is reviewing the incident and hasn't reached any conclusions about liability, spokeswoman Stacey Hendler Ross said in a written statement.

There may never be a legal decision on fault, especially if damage was negligible — as both sides indicated it was — and neither Google nor the transit authority pushes the case.

Still, the collision could be the first time a Google car in autonomous mode caused a crash.

Google cars have been involved in nearly a dozen collisions in or around Mountain View since starting to test on city streets in the spring of 2014. In most cases, Google's cars were rear-ended. No one has been seriously injured.

Google's written statement called the Feb. 14 collision "a classic example of the negotiation that's a normal part of driving — we're all trying to predict each other's movements."

Google said its computers have reviewed the incident and engineers changed the software that governs the cars to understand that buses may not be as inclined to yield as other vehicles.

Jessica Gonzalez, a spokeswoman for California's DMV, which regulates Google's testing of about two dozen Lexus SUVs in the state, said agency officials spoke Monday with Google but would have no comment.

A critic of Google's self-driving car efforts said the collision shows the tech giant should be kept from taking onto public streets self-driving prototypes it built without a steering wheel or pedals.

Google sees that as the next natural step for the technology, and has pressed California's DMV and federal regulators to authorize cars in which humans have limited means of intervening.

"Clearly Google's robot cars can't reliably cope with everyday driving situations," said John M. Simpson of the nonprofit Consumer Watchdog. "There needs to be a licensed driver who can takeover, even if in this case the test driver failed to step in as he should have."