Robotic Boats Have a 'Mind of Their Own'

Robotic boats that can move, think, and make decisions on their own may be closer than you think. 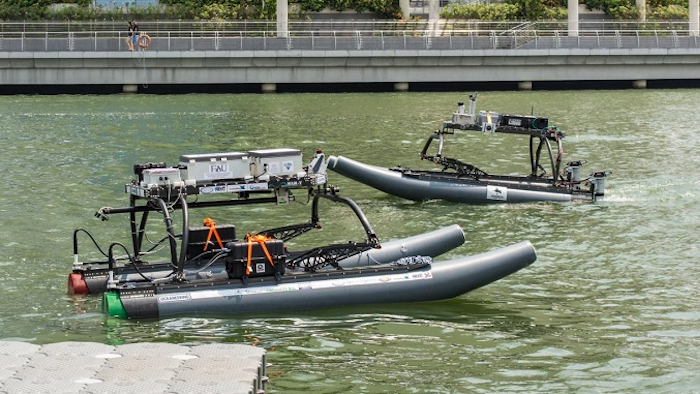 A researcher in the College of Engineering and Computer Science at Florida Atlantic University has received a $469,822 grant from the National Science Foundation to advance technology on risk-informed decision making that will enable unmanned surface vehicles (USVs) to team up with humans to work on a wide variety of civilian marine missions.

In recent years, USVs also known as unmanned robotic boats, have been increasingly used in many marine applications including ocean sampling, maritime search and rescue, hydrologic surveys, harbor surveillance, defense, and industrial offshore supply and support, which involves the extraction of both fossil fuels and renewable energies.

"There are a number of civilian applications where deploying a team of small unmanned surface vehicles operating under the guidance of human supervisors can significantly reduce costs, improve safety, and increase operational efficiencies for marine missions," said Karl von Ellenrieder, Ph.D., principal investigator of the grant and professor in the Department of Ocean and Mechanical Engineering and associate director of the SeaTech Institute for Ocean Systems Engineering at FAU. "Significant advances have been made in the area of distributed robotics, where a team of robots carries out a complex task. Our project will build on this progress."

FAU researchers on the three-year project will work to develop technologies and scientific approaches that will permit between three and 10 USVs to work together.

The USVs, which will range in size from about 5 to 10 feet, will be programmed to make decisions on their own until it's determined that they need human intervention. They will be designed to operate in complex marine environments such as congested harbors and ports, which are complex and can be chaotic.

"We believe that both the safety and efficiency of these marine operations can be significantly improved by including a cooperative team of USVs," said von Ellenrieder. "For example, ships entering and exiting a port are guided by specially trained pilots. The USV team will support the safe transfer of the pilot from the pilot vessel to the ship by using onboard sensors to measure wave and wind conditions. As the ship navigates through the port, the USV team will provide situational awareness of boat traffic, obstacles, and environmental conditions."

In a busy port where thousands of containers and other cargo are unloaded daily, it is not uncommon for items to fall into the water. The USV team will be able to see, sense and track these types of mishaps and inform their human operators.

The human-guided USV team also will be useful during the docking process itself. They will be able to gather visual information about the shape of mooring lines, line tension and the position of the ship with respect to the dock, which can be obtained from multiple vantage points on the water that are not normally available to human operators.

"Dr. von Ellenrieder's technology is expected to have a very positive impact on our coastal habitats, which are estimated to support about 70 percent of the U.S. commercial and recreational fisheries," said Javad Hashemi, Ph.D., professor and chair of the Department of Ocean and Mechanical Engineering at FAU. "As the cost of cleanup and remediation from a single oil spill resulting from a marine accident can cost tens of millions of dollars, preventing these types of accidents is one of the most cost-effective measures that can be taken to protect fragile coastal ecosystems."