How photonics can reshape the spectrum of light, and rehabilitate Edison's light bulb along the way. 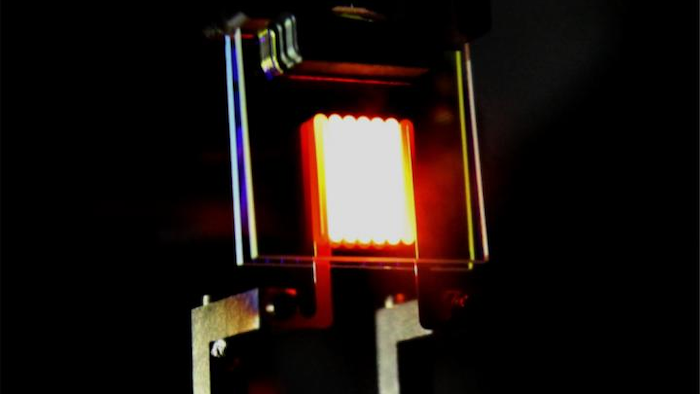 Humanity started recycling relatively early in its evolution: there are proofs that trash recycling was taking place as early as in the 500 BC. What about light recycling?

Consider light bulbs: more than one hundred and thirty years ago Thomas Edison patented the first commercially viable incandescent light bulb, so that "none but the extravagant" would ever "burn tallow candles", paving the way for more than a century of incandescent lighting. In fact, emergence of electric lighting was the main motivating factor for deployment of electricity into every home in the world.

The incandescent bulb is an example of a high temperature thermal emitter. It is very useful, but only a small fraction of the emitted light (and therefore energy) is used: most of the light is emitted in the infrared, invisible to the human eye, and in this context wasted.

Now, in a study published in Nature Nanotechnology on January 11th 2016, a team of MIT researchers describes another way to recycle light emitted at unwanted infrared wavelengths while optimizing the emission at useful visible wavelengths.

The team solved the problem by surrounding the hot object with special nanophotonic structures that spectrally filter the emitted light, meaning that they let the light reflect or pass through based on its color (i.e. its wavelength). Because the filters are not in direct physical contact with the emitter, temperatures can be very high.

To showcase this idea, the team picked one of the highest temperature thermal emitters available - an incandescent light bulb. The authors designed nanofilters to recycle the infrared light, while allowing the visible light to go through. "The key advance was to design a photonic structure that transmits visible light and reflects infrared light for a very wide range of angles," explains Ilic. "Conventional photonic filters usually operate for a single incidence angle. The challenge for us was to extend the desired optical properties across all directions," a feat the authors achieved using special numerical optimization techniques.

However, for this scheme to work, the authors had to redesign the incandescent filament from scratch. "In a regular light bulb, the filament is a long and curly piece of tungsten wire. Here, the filament is laser-machined out of a flat sheet of tungsten: it is completely planar," says Bermel. A planar filament has a large area, and is therefore very efficient in re-absorbing the light that was reflected by the filter. In describing how the new device differs from previously suggested concepts, Soljacic, the project lead, emphasizes that "it is the combination of the exceptional properties of the filter and the shape of the filament that enabled substantial recycling of unwanted radiated light."

In the new-concept light bulb prototype built by the authors, the efficiency approaches some fluorescent and LED bulbs. Nonetheless, the theoretical model predicts plenty of room for improvement. "This experimental device is a proof-of-concept, at the low end of performance that could be ultimately achieved by this approach," argues Celanovic.

There are other advantages of this approach: "An important feature is that our demonstrated device achieves near-ideal rendering of colors," notes Ilic, referring to the requirement of light sources to faithfully reproduce surrounding colors. That is precisely the reason why incandescent lights remained dominant for so long: their warm light has remained preferable to drab fluorescent lighting for decades.

Some practical questions need to be addressed before this technology can be widely adopted. "We will work closely with our mechanical engineering colleagues at MIT to try to tackle the issues of thermal stability and long-lifetime," says Soljačić. The authors are particularly excited about the potential for producing these devices cheaply. "The materials we need are abundant and inexpensive," Joannopoulos notes, "and the filters themselves--consisting of stacks of commonly deposited materials--are amenable to large-scale deposition."

Chen comments further: "The lighting potential of this technology is exciting, but the same approach could also be used to improve the performance of energy conversion schemes such as thermo-photovoltaics." In a thermo-photovoltaic device, external heat causes the material to glow, emitting light that is converted into an electric current by an absorbing photovoltaic element.

The last point captures the main motivation behind the work. "Light radiated from a hot object can be quite useful, whether that object is an incandescent filament or the Sun," Ilic says. At its core, this work is about recycling thermal light for a specific application; "a 3000-degree filament is one of the hottest and the most challenging sources to work with," Ilic continues. "It's also what makes it a crucial test of our approach."