Building Products for the Long Haul in America

Corvalent designs and manufactures industrial computing solutions with an impressive product availability guarantee, and it does it all from its U.S. manufacturing base in Texas. 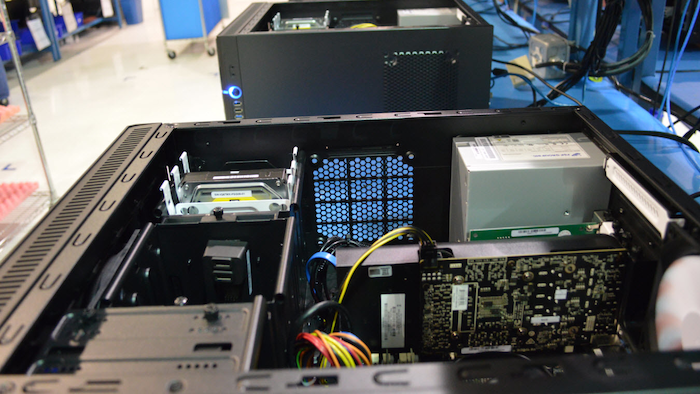 Ed Trevis is the president and CEO of Corvalent, a 24-year-old design and manufacturing company that makes industrial computing solutions for customers that demand long-term peace of mind when it comes to capital equipment investments.

A lot of this equipment can be found in critical applications in the industrial automation, military, and medical industries — everything from MRI machines and CT scanners to C-130 aircraft. The company specializes in equipment that works in various harsh environments, and customizes its computers to suit (view photos in gallery).

Before Corvalent, Trevis worked for an organization that had a small commercial PC division that sold customized computers to companies like Dell and HP for industrial environments. As the 1990s began, Trevis noticed that while his company was not doing very well when the recession hit Silicon Valley, his division that was building industrial computers was just healthy enough to try and take a shot at opening his own shop.

In 1993, when his employer eventually went under, Trevis hired a few engineers, sales staff, and operational personnel and launched American Predator, a company that designed and manufactured long-life industrial motherboards and embedded systems. The company rebranded as Corvalent in 2007, because while the name was catchy, some people at trade shows had trouble getting past the “predator” in the name.

“It was kind of a catchy name,” says Trevis, “but over the years we realized it was a little bit detrimental to us. People kept looking at [our name] and there were these predators snatching children. People start to associate this with that, and I go, ‘No, no, no. That's nothing to do with us. It's all about being American manufacturer.’”

Trevis soon found out that starting a new company was a bit more difficult than his previous role as a director of sales. While he did have some experience running a small business when he was 17 years old, it was nothing of this magnitude – it was actually a combination pet shop, garden center, and flower shop in Brazil (but that’s for another story). Trevis came over to the United States when he was 20 years old to go to school and learn English. He met a girl, had kids, and he has been an American ever since.

Luckily, Trevis surrounded himself with good people when he founded American Predator, and in the beginning, he also decided to heavily reinvest in the company. All of the company’s profits were put back into the business and towards the company’s processes.

“I have always been very impressed by U.S. manufacturing capabilities and processes, the operational excellence of American manufacturing. We invested quite a bit in the processes and the operations of the organization. Our main purpose was to provide consistency and a longevity guarantee to the products that we designed … We invested a lot in terms of software, ERP systems and quality implementation, like our ISO implementation, which most companies get done in three months. It took us two years to be compliant, because my whole reason is to be compliant, not to just get a certificate.”

Since the inception of the company, it has always been important to Trevis to remain a U.S. manufacturer. “For me, designing and building in America was a big thing,” he adds.

Corvalent’s design and manufacturing facilities are housed under the company’s own roof in Austin, Texas. The engineering department accounts for about 30% of the company, and the remainder is split between sales, marketing, finance, materials, and purchasing. The emphasis on design and development is important, because when you work with industrial motherboards and embedded systems, a company can never stop innovating.

“We can't ever stop investing in R&D,” says Trevis. “R&D is what feeds the monster here. We're always developing.”

According to Trevis, the company works very closely with Intel to develop ruggedized industrial platforms. It is a different approach than a Dell or a HP would take, because Corvalent is making more resistant products that need to withstand harsh environments.

The company faces two classes of competition, mostly large-scale operations based in the U.S. that do business in large volumes; and small offshore competition that typically have salespeople in the states and do business with small-to-midsize businesses. According to Trevis, Corvalent’s sweet spot is right between the two.

“We can actually tailor to the small and medium-sized customers and still provide large customers a good service …  and we're priced pretty much right in the middle as well. So, we're not the cheapest guy that you're going to find, but we're going to be the most economical long-term.”

According to Trevis, the landscape of the business has changed over the years. His company used to sell more board-level products, but a lot of companies are more likely to sub-contract that work out. Now, 60%-70% of Corvalent’s business is system level products.

Corvalent is able to provide white glove support and customer service for products that offer a high level of customization and consistency over a long period of time. The company also guarantees that any product that it sells will be produced for at least seven years. It’s a guarantee that a lot of offshore organizations can’t compete with.

“We guarantee seven to 10 years, but our average is really about 12 [years]. In other words, if you buy a computer from us, or a board-level product, and you've purchased them at the beginning of the launch cycle, you're guaranteed to get that product for seven to 10 years with no changes whatsoever.”

For the customer, this tactic offers consistency. By offering the same componentry, assemblies, software, drivers, etc., clients don’t have to perform as much maintenance engineering over the life of the equipment.

“If you have a medical equipment out in the field, and it's being out there for 10 years, you can get exactly the same computer as a replacement if something goes wrong.” According to Trevis, by offering the same product for such a long period of time, Corvalent helps keep the overall cost of ownership low for companies.

How is it possible to make products available for seven years? Trevis calls it ‘Longevity by Design.’

As the company designs motherboards and systems, it only specifies components from suppliers that it has a five-to-seven-year longevity/availability guarantee. On top of that, the company also has a materials program with key suppliers to make sure that these components are made available another two-to-three years beyond end-of-life.

The company certainly goes to extremes. For example, Trevis describes an Intel 486 motherboard that it has produced for a medical company for 17 years. While the company can’t guarantee 17 years of availability for all customers, it’s a testament to the lengths the company is willing to go to to support a client.

“[Products] are available as long as we can still buy parts,” Trevis adds.

The product availability is a bold decision when you consider that all of Corvalent’s products are sole-sourced, and customized in some way. This means that Corvalent is the only company that can provide the particular product and, as Trevis states, no product ships as it appears on the website. By taking advantage of the customization, clients minimize the amount of configuration work on their end.

The practice is not without its challenges, particularly when customers have old technology. Trevis says that the company often works with customers who have dated equipment, particularly peripherals, such as motor controls. Corvalent will work with the customer to create custom firmware and hardware that helps solves common problems, like timing issues.

“We're very selective about the customers we do business with. We don't typically work with the customer that needs a one-shot deal or they just want three months’ worth of products. Typically, the organizations that we do business with are highly regulated or they're trying to produce a specific product for long-term [operation]. They understand the long-term cost-of-ownership … and they realize Corvalent actually saves [them] millions of dollars.”

Corvalent designs and manufactures all of its products at its facilities in Austin, Texas. When you talk to Trevis, you understand that American manufacturing is a passion of his.

He believes manufacturing is the backbone of the American economy, and he takes a great deal of pride in knowing that he is contributing to the economy.

“Providing American jobs, helping local economies, helping states, helping our own country in terms of jobs and taxes and consumption, it has a lot of benefits, not just to shareholders, but to everybody, rather than just trying to localize or manufacture somewhere to save a buck.

“I've seen this over the years, very short term thinking when companies moved offshore to save a buck to put more profits in the hands of shareholders. At the end of the day, that's short lived. I think companies like Dell, for example, they took all their manufacturing to China, and it can only be so cheap for so long. Five years later, you have an identity crisis. You can't be the cheapest in the industry anymore because everybody else is.”