An overview of rolling resistance, how to calculate, and apply to industrial wheel applications. 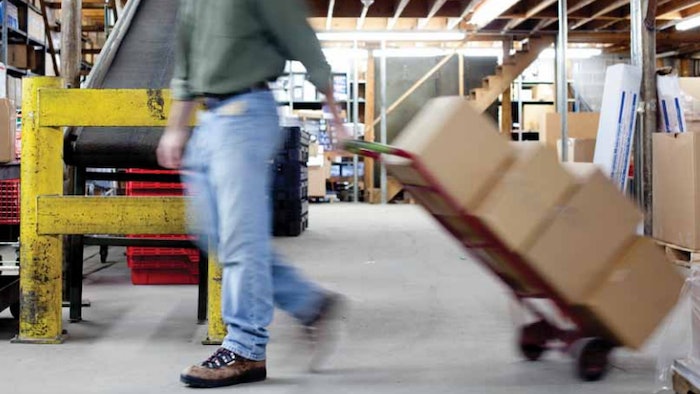 In the world of industrial wheels, rolling contact would ideally offer no resistance to motion, but reality doesn’t work this way.
Hamilton Caster

Friction plays a major role in the industrial world, and also in everyday life. Friction is the resistance to sliding, rolling, or flowing motion of an object due to its contact with another object. It can be either beneficial (when we brake our car to stop) or detrimental (trying to drive with one foot on the brake pedal). This article will focus on rolling resistance, an important facet of industrial wheels.

Rolling resistance is a measure of the retarding effect of a floor surface at the tread/floor interface of the wheels. It is normally expressed in pounds and is a measure of the energy dissipated per unit of distance rolled. Consider a tire rolling on a flat surface. The tire will deform to some extent, and that deformation will cause some resistance to the rolling motion. The flat surface may also deform, particularly if it is relatively soft. Sand is a good example of a soft, rolling-resistant surface. Bicycling across a paved roadway is much easier than across a white sandy beach. Rolling resistance measures the energy lost as something is rolled a specific distance.

In the world of industrial wheels, rolling contact would ideally offer no resistance to motion (except when we wanted something to remain in place). But reality doesn’t work this way. Energy is dissipated:

a. Due to friction at the contact interface
b. Due to elastic properties of materials
c. Due to roughness of rolling surface

As one can see in this exaggerated view (Figure 1), both the wheels and the surface undergo deformation to the extent determined by the elastic properties of the two surfaces.

The diagram below (Figure 2) addresses sliding friction. Imagine the force required to push a heavy box across a floor. Static friction requires a certain applied force to get the box moving. Once moving, dynamic friction requires a relatively constant force to maintain that motion. In this example, the person pushing is producing the “applied force,” and the box weighing “N” and the floor create the “friction force” which tends to resist that motion.

The reason we use wheels in material handling is the significantly lower effort (force) required to move an object. Imagine pushing a refrigerator or a piano without wheels! Furthermore, consider how much easier it would be to push the box (mentioned earlier) across the floor if it were on wheels. \

The force required to push/pull wheeled equipment is always greatest at the start, just before movement begins. Ergonomists refer to this force as the initial or starting force. Fortunately, the initial forces typically last only a short time and drop to the sustained force levels once the acceleration begins and any mechanical interference at the start of movement is overcome. Once in motion at a relatively constant speed, the force requirement is generally lower. This force is called the sustained or rolling force.

To help quantify rolling resistance in industrial wheels, there is the coefficient of rolling friction. This is a number that has been empirically determined for different materials, and can vary by the speed of the wheel, the load on the wheel, and the material the wheel is contacting. In the chart below (Figure 3), it is not surprising that the softest tread material (rubber) has the highest coefficient of friction, while the hardest material (forged steel) has the lowest.

Find the force required move a 4,800 lb trailer equipped with 8 in. diameter polyurethane 85A wheels on a flat steel floor.

Step 2: From the provided table find coefficient of rolling resistance “f”
f = 0.047(in.) [Note: Polyurethane has a range of coefficient values, depending on the specific material selected.]

The force to start (initiate) motion is in general 2 to 2.5 times the sustaining force. In the example above starting force is approximately 115 lb.

Wheel bearing selection in regard to rolling resistance is not as critical as the wheel material and diameter. Anti-friction bearings don’t make as big a difference to rolling resistance as factors such as wheel material and wheel diameter. However, bearing selection can be very important for other reasons such as load capacity, manual or towed operation, presence of shock loading or side thrusts, and desired maintenance. As one might suspect, a softer wheel tread material will generally result in greater rolling resistance than a very firm/hard wheel tread material.

The most significant factors to be considered are:

Factors that can usually be ignored during calculations are:

General ergonomic suggestions for maximum (manual) pushing forces can be found in interactive tables at the Liberty Mutual Manual Material Handling section of their website.

Rolling resistance plays a major role in material handling. Whether loads will be towed or pushed manually, proper wheel selection will significantly impact the results. Using the principles described in this paper will enable good choices.