How one Andretti Racing partnership could impact passenger vehicle design and production in the very near future. 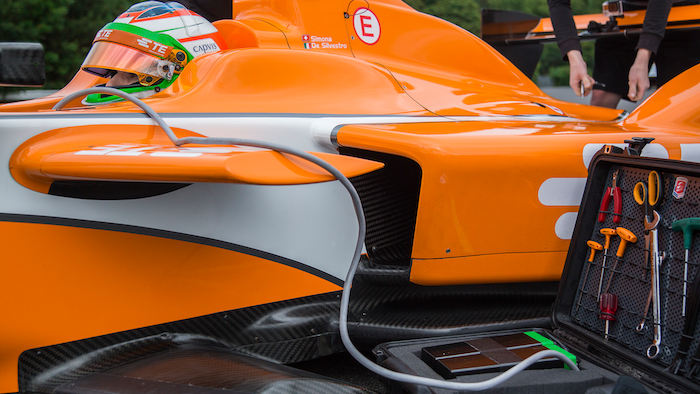 Between September and June some of the most innovative and technology-fueled engineers will be taking to city centers around the world with the simultaneous goals of winning races and changing societal paradigms. According to the series’ website, “Formula E (now in its second year) aims to represent a vision for the future of the motor industry, serving as a framework for R&D around the electric vehicle, accelerating general interest in these cars and promoting clean energy and sustainability.”

Lofty goals, especially for a fan base that’s used to high-horsepower, gasoline-fueled engines that inspire equal parts adrenaline and intimidation. Replacing the smell of oil-laden internal combustion engines and the sounds of escalating RPMs in these Indy-style cars with the windings of an electrical motor would seem daunting. However, when legendary racing names like Penske and Andretti start building teams in support of a series, and entrepreneurs like Sir Richard Branson get involved, even a casual observer is going to take notice.

Formula E operates with an open format, allowing teams and manufacturers the opportunity to showcase their own electrical energy innovations – provided they fall within FIA (Federation Internationale De L’Automobile) specifications. The thought being that this will simultaneously propel teams into not only developing winning technologies, but those that will translate to hybrid-electric vehicles used by the everyday person on country roads and highways around the world.

In race mode, maximum power is restricted to 170kW, and car charging is forbidden during qualifying and the actual race – which lasts about an hour. In comparison, the latest generation Toyota Prius generates 100 kW of power when the electric motor is combined with the gas engine. The Nissan Leaf, which is a fully electric car, has a 90 kW motor.

The rule relating to power not only helps to level the investment playing field in terms of motors and batteries, but also pushes electric vehicle technology to address one of the primary obstacles hindering greater acceptance of HEVs – range anxiety. This stems from concerns over whether an all-electric vehicle’s charge will last long enough to complete a trip, or at least make it to the next available charging station.

Since 2012, over 400,000 HEVs have been sold in the U.S. And although lower gas prices over the last two years have impacted additional growth, electric vehicle market share is hard to ignore. At least that’s the case for TE Connectivity. With offerings ranging from connectors and wiring to fiber optics and sensors, the HEV market is a natural fit. And where better to test the company’s focus on precision performance in demanding environments than racing.

Regardless of what is being used to generate a motor’s power – electricity, gas, etc. – efficiency will always be key concern. Efficiency not only in generating as much power as possible, but in managing byproducts of this power, like heat and vibration. Additionally, minimizing the footprint of the motor, the components delivering the power (battery) and the systems that will manage the efficiency-robbing elements of heat, vibration and electrical noise is key to improving overall efficiency.

So as TE Connectivity looks to expand its presence in the HEV marketplace, the partnership with Andretti and Formula E has proven to be a vital asset. “The technology being developed for Formula E not only has to keep pace with the competitive demands of racing,” states Rob Shaddock, executive vice president and chief technology officer at TE Connectivity, “but provide efficiency gains that can be passed on to over-the-road vehicles.” TE’s components and engineering expertise has been key in addressing two critical issues – mechanical efficiency and heat dissipation.

Regardless of the motor type, a vehicle weighing less will obviously demand less power. So just like any automotive design, HEVs – both on the track and off – focus on reducing the footprint of every component, including connectors, wiring and even the battery. In addition to smaller, more efficient parts, TE is pushing the use lighter-weight materials. Replacing copper with aluminum is one example.

Another area where Formula E technology hopes to generate far-reaching gains is in managing vibration. More electric current adds electrical noise that disrupts power transfer. Here, TE is developing shielding that not only addresses this concern but maintains footprint discipline.

“The future of automotive is less about mechanical systems and more about software,” states Shaddock. “Going forward there will be fewer gearboxes as software controls the drivetrain, traction control, suspension and more as we trend towards autonomous vehicles. So the goal in developing HEV technology in Formula E and beyond is to optimize the mechanical systems that remain while improving overall efficiency and safety via the software.”

This software, of course, will depend on data from sensors and other components fueled by a powerful battery. This makes the implementation of new technologies, or at least new to automotive applications, key in continuing to ensure efficiency and reliability gains.

While Formula E obviously lends well to advancing automotive technology, TE has seen how applications from other sectors have also helped in addressing key challenges. “I can remember one particular problem our team was having with finding connectors that were robust enough to handle the electrical load, but still met the right requirements for the race car,” states Shaddock. “We ended up finding a solution in our aerospace offerings.

“It’s a great example of why we formed this partnership. It makes our engineers think quickly about solutions – solutions that in many cases might only demand slight modifications of technology we’ve already developed.”

Following with this theme, Shaddock and Rich Harmer, a TE Connectivity engineer embedded within the Andretti Formula E team, have begun investigating the use of fiber optics. “There’s more data traveling throughout the car in managing systems,” offers Shaddock. “This demands more cables, wires, connectors, etc. that can add to the overall weight or footprint. Not only are fiber optic cables lighter, but data can travel more quickly, improving efficiency on a couple of levels.”

The Andretti team is one of nine currently competing in the Formula E series. If the gains and knowledge obtained in its partnership with TE Connectivity are mirrored by the others, the development of HEVs with more power, longer trip times and greater overall efficiency could be realized much sooner than expected.

The Signs of Distracted Driving