New details in the saga might explain why the recently acquired NECCO is already being sold.

We’ve reported extensively on the bizarre saga that’s been the sad decline of the New England Confectionary Company – the Revere Massachusetts-makers of NECCO Wafers and Sweetheart candy hearts, among other divisive treats. Mary Janes, anyone? Ugh.

The company had received its death sentence earlier this year before being purchased at auction in the 11th hour by the same company who bailed out the Twinkies brand – Round Hill Investments. Unfortunately, this was right around the time that news broke that NECCO’s Massachusetts plant was in a pickle with the FDA, mainly over some mild accusations that the facility was overrun with rodent feces.

The next chapter in this strange tale was Round Hill abruptly closing NECCO’s manufacturing facility in July and announcing it was already selling the company. Round Hill told the Boston Globe that it “was very excited to acquire Necco” but after careful consideration, the firm is deciding to sell the candymaker’s brands and close the plant.

Since that statement, news of several lawsuits has surfaced, the first of which might provide a little more insight into why Round Hill cut and run: NECCO’s new owners are being sued by a trustee in NECCO’s bankruptcy case, for failing to make the final payment it owed in buying the company. Round Hill is being accused on “deceptive business practices” in withholding the last million of the $17.33 million purchase price, but Round Hill is basically contending that the unfair business practices were the other way around.

The buyer claims that it doesn’t owe squat at this point because, when it won the NECCO auction, it was never informed of the aggressive threats the FDA had levied against the manufacturer relating to the sanitation problems at its plant. To add insult to injury, shortly after the sale, media coverage blew up over this “gross negligence” in a way that was both “stunning and unprecedented,” disrupting Round Hill’s plans to turn it around. They say their remediation costs in the months they operated the plant actually exceeded a million dollars, and that they’re off the hook for that final payment.

That’s a lot of rodent feces.

And since the Revere plant closed, Round Hill has faced another lawsuit, this time from the plant workers, who claim that they were told the plant would remain open until at least November 30, and they weren’t given enough notice that their jobs were being eliminated. In the class action lawsuit, NECCO employees are asking for 60 days in back wages.

But, at least, no matter how this suit turns out for the workers, they’re probably not going to have a hard time finding new employment. The Boston Globe is reporting that the city of Revere held an event to help the former NECCO talent connect with more than 50 local businesses who were each looking to hire between 2 and 150 employees. 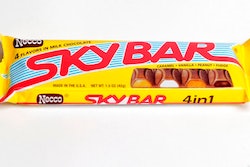