A look at what cities are promising Amazon in exchange for building a $5 billion, 50,000-job facility in their backyard.

Back in September Amazon announced that it was accepting proposals for the location of its new HQ2 headquarters. The company said they were looking to invest upwards of $5 billion in constructing this new 50,000-job facility. With initial proposals supposedly due later this week, here’ a look at what some are willing to do in bringing an influx of $15/hour jobs to their town.

They do everything bigger in Texas, right? The city of Dallas is going with this theme in offering a development that would surround a station for a proposed $15 billion bullet train. Not yet approved, this train would run between Dallas and Houston. Ironically enough, the area being proposed for the new Amazon building would be a vacant 500,000 square foot site that used to be a shopping mall.

Phoenix must have really liked the irony of that Dallas deal, but they stepped it up a notch in promising Amazon a renovated version of that city's very first shopping mall.

Chris Christie wants to bring Amazon to New Jersey with good, old-fashioned tax incentives – to the tune of about $5 billion. Interesting how that amount mirrors exactly what Amazon is looking to spend on the new HQ. The New Jersey plan would establish a subsidy program that pays Amazon $5,000 - $10,000 for each job it creates.

Memphis, which is also home to a major FedEx hub, is offering a paultry $60 million in tax incentives but does offer a centralized location and infrastructure that’s ideal for a distribution business.

While Philadelphia might not be promising the best economic advantages, they are offering the biggest chunk of real estate. In responding to Amazon’s desire for 500,000 square feet for buildings on a site up to eight million total square feet, the city where it’s always sunny is offering sites totaling 28 million square feet.

Whereas others are designating space for Amazon, the folks from Frisco, Texas (population 160,000) are offering to build around wherever Amazon wants their building. The city, which lies just outside of Dallas states it is willing to expand whatever infrastructure Amazon needs if they're chosen as the site for HQ2.

Stonecrest, Georgia, with a population of just over 50,000, said it is basically willing to re-name its city after the e-commerce giant if they’re chosen, in dedicating 345 acres to the company.

In total, more than 50 U.S. cities are vying for the Amazon location, with the leading contenders rumored to be Atlanta, San Jose, Pittsburgh and Austin.

Mfr Bails After Millions in Incentives 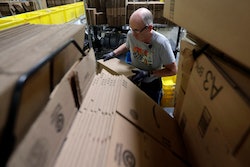