A $98 million pay-out to the former CEO after a year of bad publicity and litigation led to a dramatic response.

Over the last eight months or so, the pharmaceutical company Mylan NL has been in the headlines for a number of reasons. The most notable being its decision to jack up prices on anti-allergy EpiPens by more than 500 percent since acquiring the product a decade ago.

These price increases led to an investigation by the House Oversight Committee, which contributed to a 13 percent drop in the stock price. There was also a $465 million settlement stemming from allegations of $1.7 billion in EpiPen Medicaid overcharges.

Next week the company will hold a shareholder meeting. And despite all the negativity, normally coming off a year in which revenues increased 18 percent to over $11 billion wouldn’t set the scene for too much drama.

The problem is that despite these revenue numbers, the company that also makes Vivarin and Geritol vitamins saw its profits drop significantly in the face of litigation and shrinking stockholder confidence.

Institutional Shareholder Services (ISS) is a proxy advisory firm. Basically, they’re hired by hedge and mutual funds to research and offer advice when it comes to shareholding voting. ISS not only carries influence with the fund managers that employ them, but because they’re the largest such firm in the industry, their words carry weight with all shareholders or voters.

Earlier this week ISS launched a campaign advising shareholders to vote against 10 of Mylan’s 11 current board members, as well as CEO Heather Bresch.

In other words, they want shareholders to go ‘scorched earth’ on Mylan in removing nearly all of the company’s top leadership. This seems to have resonated with a number of large shareholders, including the New York City and State pension funds.

While any of the aforementioned moral and financial blunders could warrant a scorched earth plea, what sent ISS over the edge was learning that former CEO Robert Coury was paid $98 million last year as he transitioned to the role of executive chairman.

ISS cited the “oversized compensation” in the face of damage that was done to the company from the EpiPen controversy and shareholder losses as justification for the voting tactic.

To get the desired result, each vote against these board members would need a two-thirds majority. 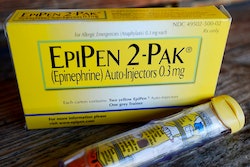