After visiting several Baldor locations, Mahr Federal's Local District Manager was able to suggest a number of gaging improvements, two of which resulted in Baldor switching from mechanical to air gaging. 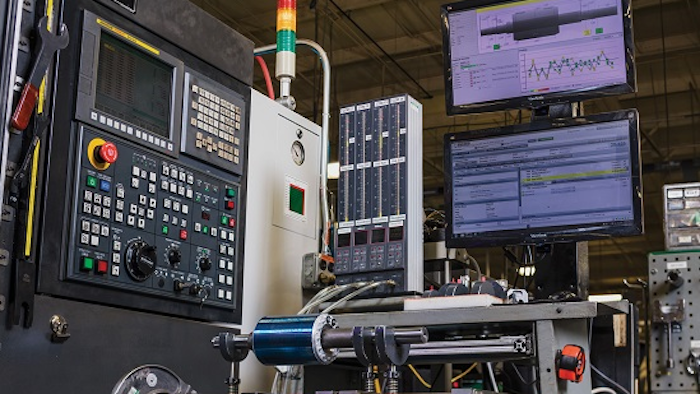 As part of its continuous improvement process, Baldor Electric Company recently reached out to Mahr Federal (Providence, RI) to help identify opportunities to improve process capabilities within its machining cells. One of the goals of the project was to reduce failure costs on several components.

Founded in 1920 and headquartered in Fort Smith, AR, Baldor is a leading manufacturer of industrial electric motors and mechanical power transmission products sold to distributors and original equipment manufacturers in more than 70 countries.

After visiting several Baldor locations, Mahr Federal's Local District Manager was able to suggest a number of gaging improvements, two of which resulted in Baldor switching from mechanical to air gaging.

"We appreciated the ease of use with this system," said Corporate Quality Engineer Brandon Canclini, "such as being able to identify when a part is within tolerance by utilizing a series of brightly colored LEDs at various set points located on the display columns, as well as the way Mahr columns communicate with various SPC software. Being able to easily integrate SPC within manufacturing processes has always been desired to further understand process capabilities."

The air snap gages allowed the operator to check the parts while still mounted in the machine tool. This provided true in-process checking and instant correction if needed, without having to re-mount the part as with a post process gaging station.

Baldor also wanted better control of bearing bore diameters on electric motor housing endplates. They were using three-point mechanical bore gages to measure a part tolerance of .0007". A Gage Repeatability and Reproducibility (GR&R) study revealed it was extremely difficult to accurately measure without overly securing the parts. Mahr Federal identified there was also an opportunity to improve the roundness of the bores.

GR&R studies assess the reliability of gaging results. A GR&R study involves several gage operators measuring a small number of parts, several times each. The results are compiled, and reduced to a single number that indicates the total expected spread of measurements for a single part, for all trials, by all operators. The number is presented as a percentage: a typical GR&R target of 10 percent means that all the results fall within a range equal to 10 percent of the allowable part tolerance.

The best three-point mechanical gage tested for Baldor was only able to achieve a GR&R of 39% without tooling to secure the part. The jet air plug, in combination with the Millimar 1840 PE column display, achieved a GR&R of 6.6%. Mahr's air jet plug combination improved the overall measurement system within Baldor's high-volume environment, and eliminated the need for excessive tooling to secure the part during inspection.

Because air gaging is manufactured specifically for the part size being measured there is virtually no operator influence in the measurement. This means the results are faster and much more repeatable than with other variable gaging solutions.

After this testing, Baldor converted five plants in North America that build the electric motors to Mahr Federal air gages and 1840 PE column displays for checking the bearing bores.

"These GR&R results meant less variation from operator to operator," said Canclini, "and gave us a much clearer picture of the process. Integrating the Mahr system in all endplate machining cells across the whole company resulted in improved process capabilities, reduced manufacturing costs and improved cycle times."

Mahr Federal Inc., a member of the Mahr Group, has over 150 years of experience providing dimensional measurement solutions to fit customer application needs. For more information visit www.mahr.com or call 800-343-2050