He led the brand's global growth. 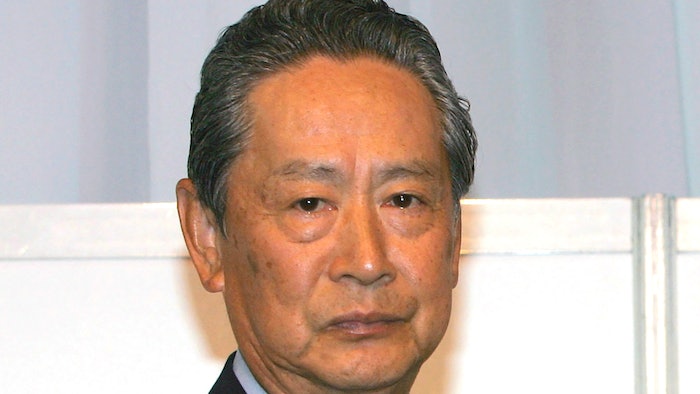 Then Sony Corp. chief corporate adviser Nobuyuki Idei, is seen in Tokyo on Oct. 17, 2005. Idei, who led Japan’s Sony from 1998 through 2005, steering its growth in digital and entertainment businesses, has died of liver failure, the company said Tuesday, June 7, 2022. He was 84.
AP Photo/Shizuo Kambayashi, File

TOKYO (AP) — Nobuyuki Idei, who led Japan’s Sony from 1998 through 2005, steering its growth in the digital and entertainment businesses, has died, the company said Tuesday. He was 84.

Idei died of liver failure on June 2 in Tokyo, Sony Group Corp. said in a statement.

Sony Chief Executive Kenichiro Yoshida said he and the company were indebted to Idei’s vision in preparing Sony for the Internet age.

“During his seven years as CEO from 1998, Mr. Idei made an immense contribution to Sony’s evolution as a global company. In particular, the prescience and foresight with which he predicted the impact of the Internet and engaged proactively with digitalization across Sony amazes me to this day,” he said.

Tokyo-based Sony is among Japan’s stellar brands, having brought the world the Walkman portable music player. But it had humble beginnings in the 1940s, when the nation was rebuilding from the ashes of World War II.

Sony was founded by Akio Morita, who co-wrote “The Japan That Can Say No,” which advocated for a more assertive and prouder Japan, and Masaru Ibuka. In the 1970s, when Sony was developing the Walkman, some engineers were skeptical. But Morita insisted people would listen to music on-the-go.

Idei joined Sony in 1960, after graduating from Tokyo's prestigious Waseda University, and worked in its audio and video divisions.

He was appointed president in 1995, and is credited with being behind hit products such as the Vaio laptop.

He became chief executive three years later, hand-picked by Norio Ohga, who led Sony in the 1980s and 1990s and was a flamboyant music lover who played a key role in the company’s development of the compact disc.

Idei also solidified a global group management framework and corporate governance structure at the company. He was appointed to lead Japan’s government IT Strategy Council in 2000, helping the nation set up broadband networks.

He was succeeded by Howard Stringer, the first non-Japanese to lead Sony, an appointment meant to better integrate Sony’s electronics and entertainment businesses.

That shake-up in 2005 came at a time when concerns were growing about whether Sony could revive its electronics operations in the face of cheaper competition from Asian rivals. Sales of products that were once pillars of Sony’s power, such as TVs and portable players, had dived.

In 2003, under Idei’s helm, Sony stock nosedived in what was dubbed the “Sony shock” after it reported worse-than-expected red ink.

Sony had repeatedly promised to generate profits through futuristic gadgets that download entertainment for the network-linked home, allowing the company to exploit both its electronics and entertainment divisions.

“The Sony shock was a shock for us, too,” Idei said at the time. “We want to change the shock into something positive.”

After his retirement from Sony, Idei established the consulting company Quantum Leaps Corp. that focused on reshaping companies and nurturing a next generation of leaders.

Idei is survived by his wife and their daughter, according to Sony. A private funeral service was carried out with immediate family, and a company memorial event in his honor is being planned for a later date, it said.

The Microsoft co-founder is considered the largest private owner of farmland in the country.
Jun 24th, 2022
Follow Us
Most Recent