P&WC is targeting a 30% improvement in fuel efficiency. 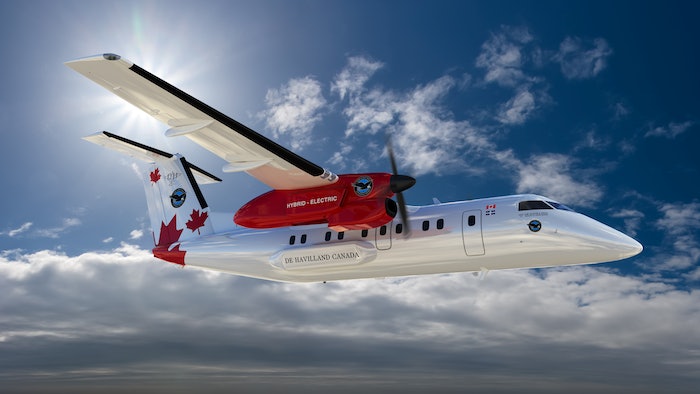 “We’re delighted to draw from H55’s technology in the field of aircraft battery systems, and collaborate with NRC and IVI on optimizing the design for our hybrid-electric flight demonstrator program,” said Jean Thomassin, executive director new products and services, P&WC. “Hybrid-electric technology holds significant potential to boost the efficiency of next generation aircraft propulsion systems, allowing us to set new standards for sustainability for regional and commuter aircraft.”

The participation of H55 follows P&WC's July 2021 announcement of its plans to demonstrate hybrid-electric propulsion technology, through a CAD$163 million investment, supported by the governments of Canada and Quebec.  Working with Raytheon Technologies sister company Collins Aerospace, and De Havilland Aircraft of Canada Limited, P&WC is targeting a 30% improvement in fuel efficiency and commensurate reduction in CO2 emissions, compared to today’s most advanced turboprop engines for regional aircraft. Collins Aerospace will provide the 1 megawatt electric motor for the hybrid-electric propulsion system.

“Our goal has always been to address regional commuter transportation and with P&WC, there is a perfect fit whereby our core technologies complement each other,” said André Borschberg, co-founder and executive chairman, H55.  “Both companies share the same vision as to how hybrid-electric propulsion can offer a range of environmental and economic benefits. Having been selected by P&WC is an important validation that our experience is valued by a reputable industry player. We are excited to be working in Quebec with P&WC and several other industry and research collaborators in bringing our battery pack to the hybrid-electric demonstrator program.”

As the technological spin-off of Solar Impulse, the first electric airplane to fly around the world, the mission of H55 is to make aviation clean, safe, and affordable. The Swiss-based company’s core competencies lie in developing propulsion and energy storage solutions which are modular, lightweight, and safe. After having worked and flown four electric aircraft, H55 is well placed to act as a key enabler for electrified regional commuter transportation.

As Canada's largest federal research and development organization, the NRC has a century-long history and track record of contributing to the development of science and innovation in Canada. The NRC’s contributions will include supporting the development of the high voltage battery sub-systems and their related elements. IVI will also support development work to optimize the design and integration of the battery and control systems on the De Havilland Canada Dash 8 experimental aircraft. Ground testing of the propulsion technology will begin in 2022, towards a flight demonstration in 2024.

“We are delighted to support this project as part of our mission to help companies develop and integrate innovative vehicle technologies,” said François Adam, general manager, IVI. “By enabling future aircraft to achieve greater efficiency and lower emissions, projects like this will contribute to a cleaner and more sustainable transportation industry.”

Hybrid-electric propulsion technology is a core element of Pratt & Whitney’s strategy for continually advancing the efficiency of aircraft propulsion systems, in support of the industry-wide goal of achieving net zero CO2 emissions for aviation by 2050. The company is also developing technologies to support greater use of cleaner, alternative fuels, including Sustainable Aviation Fuels (SAFs) and hydrogen, each of which will benefit from the increased efficiencies enabled by hybrid-electric propulsion systems.