The plant would produce vaccines for potential future pandemics and as well as seasonal health issues such as the flu. 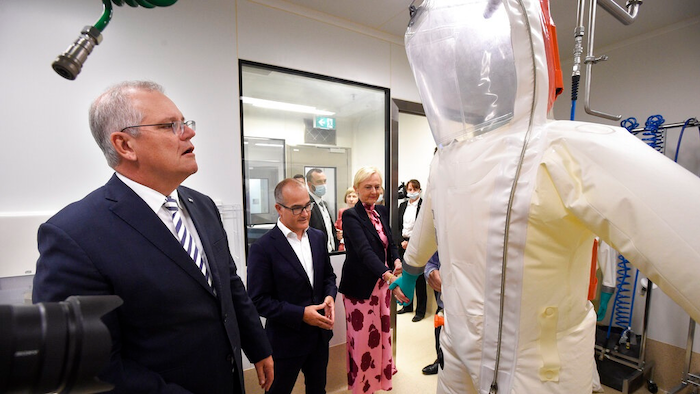 Australian Prime Minister Scott Morrison, left, looks at a hazard suit during a tour at the Peter Doherty Institute for Infection and Immunity in Melbourne, Tuesday, Dec. 14, 2021. Australia's government said Tuesday it plans to start making mRNA vaccines at home with a new plant that could produce up to 100 million doses each year.
Andrew Henshaw/AAP Image via AP

CANBERRA, Australia (AP) — Australia's government said Tuesday it plans to start making mRNA vaccines at home with a new plant that could produce up to 100 million doses each year.

The announcement came as coronavirus cases in Sydney and surrounding areas jumped, driven in part by the omicron variant.

The new factory would be built in Victoria state in a partnership between vaccine manufacturer Moderna and the federal and state governments. It is expected to open by 2024.

“The mRNA vaccines have proven to be, I’d argue, the biggest scientific discovery over the course of this pandemic," Morrison said. "And that means that they are a massive part of the future of vaccines, not just here in this country but all around the world."

Morrison said the plant would produce vaccines for potential future pandemics and as well as seasonal health issues such as the flu. He said the locally produced vaccines could help not only Australia but also the Pacific region, which Australia has already been supplying.

Australian Medical Association President Omar Khorshid said the locally made vaccines would be a significant addition to the world’s stocks during a future pandemic.

“It is great news, not just for the management of this pandemic, but for the enormous horizons that mRNA technology has in terms of treating other diseases we wouldn’t have thought could be treated by vaccines, such as cancers,” he told the Nine Network.

Meanwhile, New South Wales state, where Sydney is located, on Tuesday reported more than 800 new virus cases, the highest daily total in more than two months. Health authorities have identified dozens of omicron cases recently and expect the number to rise as they complete more testing.

The spike in infections comes just a day before certain virus restrictions are due to be eased, with unvaccinated people allowed back in pubs, cafes, gyms and shops.