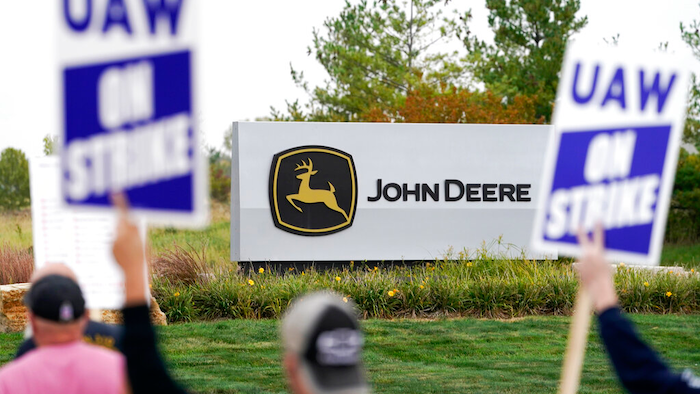 Members of the United Auto Workers strike outside of a John Deere plant on Oct. 20, 2021, in Ankeny, Iowa.
AP Photo/Charlie Neibergall

DAVENPORT, Iowa (AP) — A judge on Wednesday issued a temporary restraining order that details how picketing workers at the Deere & Co. plant in Davenport must conduct themselves.

In seeking the injunction Wednesday, Deere officials alleged that striking workers had disrupted access to the Davenport Works plant and put others at risk.

District Court Judge Marlita Greve ordered the union to allow only four picketers at a time near the gates of the plant. The order also banned the use of chairs and barrel fires, and prohibited picketers from harassing or intimidating people entering and leaving the plant, the Quad-City Times reported.

Deere spokeswoman Jen Hartmann said the company sought the injunction to provide a safe environment for contractors and employees, including those participating in the strike.

The injunction prohibits picketing or congregating “near the Contractor Gate entrance,” which is regarded a neutral gate that cannot be picketed, according to Deere.

U.S. Secretary of Agriculture and former Iowa Gov. Tom Vilsack met with striking workers Wednesday at Deere's plant in Ankeny. Vilsack told the union workers that he stood with them, noting the UAW had long supported him in his political career, WHO-TV reported.

A contract would cover 10,000 striking workers at 14 Deere plants, including seven in Iowa, four in Illinois and one each in Kansas, Colorado and Georgia.