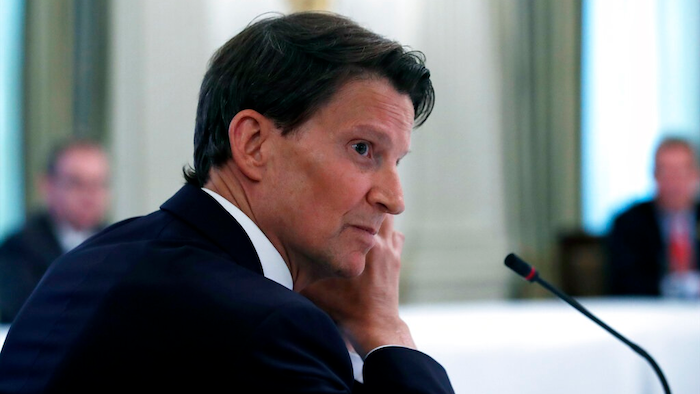 Brian Goldner, chairman of the board and CEO of Hasbro, listens as President Donald Trump speaks during a roundtable with industry executives about reopening the country after coronavirus closures, in the State Dining Room of the White House, Friday, May 29, 2020, in Washington. Toymaker Hasbro Inc. announced Sunday, Oct. 10, 2021, that Goldner is taking a medical leave of absence from his CEO role, effective immediately. The move follows Goldner's disclosure in August 2020 that he was undergoing continued medical treatment for cancer since 2014.
AP Photo/Alex Brandon, File

The move, announced Sunday, follows Goldner's disclosure in August 2020 that he was undergoing continued medical treatment for cancer since 2014.

Rich Stoddart, most recently the lead independent director of Hasbro’s board, has been appointed as interim CEO and will begin immediately.

Hasbro says Stoddart brings extensive leadership experience and expertise in global brand-building, advertising and marketing, and supply chain management. He was previously CEO at InnerWorkings, Inc., the largest global marketing execution company, and Leo Burnett Worldwide. He has served on Hasbro’s board since 2014.

In conjunction with appointing Stoddart as interim CEO, Hasbro’s board has reappointed Edward M. Philip as lead independent director, and Tracy A. Leinbach as chair of the nominating, governance and social responsibility committee of the board.

“Brian has been an inspiring and visionary leader who has set Hasbro on an incredible path towards the future. All of us at Hasbro are thinking of him while he focuses on his health," said Philp in a statement.