The carmaker is going to hire 11,000 workers, but just how good will those jobs be? 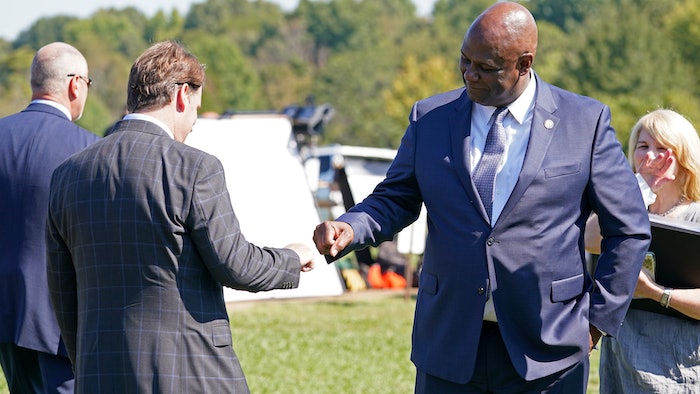 United Auto Workers President Ray Curry, right, bumps fists with Jim Farley, Ford president and CEO, left, after a presentation on the planned factory to build electric F-Series trucks and the batteries to power future electric Ford and Lincoln vehicles Tuesday, Sept. 28, 2021, in Memphis, Tenn. The plant in Tennessee is to be built near Stanton, Tenn.
AP Photo/Mark Humphrey

NASHVILLE, Tenn. (AP) — Ford’s blockbuster announcement this week that it would build four sprawling new factories in Kentucky and Tennessee by 2025 and hire nearly 11,000 workers raised a big unanswered question: Just how good will those jobs be?

No one — not Ford, not the United Auto Workers union, not the future job holders themselves — yet knows how much the workers will be paid or whether they will vote for union membership.

Three of the plants, to be built with Ford's South Korean corporate partner, SK Innovation, would produce batteries for 1 million electric vehicles annually. A fourth would make the next generation of electric F-Series pickup trucks, a version of America's top-selling vehicle.

The new factories represent an $11.4 billion bet by Ford on a vision for the future in which tens of millions of drivers will shift from pollution-belching internal combustion engines to electric vehicles that emit nothing from the tailpipe.

The stakes are high for Ford’s employees as well as for the UAW, which is counting on ensuring union membership at battery factories to replace jobs that will be lost should the transition to electric vehicles happen as Ford and others envision. Union workers generally are paid, on average, 20% more than their nonunion counterparts, typically receive more generous benefits and wield a larger voice on safety and other workplace rules at their factories.

On Monday, when Ford's plans were announced, CEO Jim Farley stopped short of publicly supporting the UAW, saying only that union representation at the plants would be decided by the workers themselves. In Kentucky and Tennessee, states in which unions have often been shunned by workers and opposed by political leaders, representation by the UAW is far from assured.

On Wednesday, Ford said it expected to continue a “strong, mutually beneficial” relationship with the UAW.

“We respect the UAW’s efforts to organize future hourly workers at the new facilities coming to Tennessee and Kentucky,” Ford and SK said in statements.

By stopping short of offering explicit support for union membership at its new plants, experts say, Ford may be trying to appease politicians who have been vocal opponents of union organizing. Political leaders in both states still have to approve money for worker training and other incentives to Ford, said Dan Cornfield, who teaches sociology and political science at Vanderbilt University in Nashville, and the company wouldn't want to jeopardize that support.

“The company is in between its union partners and its state government partners in this,” Cornfield said. “So they probably are not speaking out about unionization one way or the other because they don’t want to antagonize their longstanding partners.”

Not to mention rankle President Joe Biden, who has frequently promoted an industry-wide transition to electric vehicles as a vital way to counter climate change and create “good-paying union jobs.”

A letter attached to Ford’s national contract with the UAW pledges that the company will remain neutral when the union tries to organize any new factories. It will agree to “card check” sign-up efforts, which let unions recruit workers to sign cards saying they want to be represented. Once 51% of workers sign on, the plant becomes union.

In Tennessee, in particular, political leaders, including Republican Gov. Bill Lee, have fought the UAW, which lost recent factory-wide organizing votes at a Volkswagen plant in Chattanooga. In opposing the UAW, Lee argued that union membership would make it harder for the state to recruit other manufacturers.

“It is more difficult to attract companies into states that have a high level of organized union activity,” Lee said ahead of a 2019 vote at VW. “For that reason, I think that Volkswagen remaining a merit shop facility is beneficial to the economy of Tennessee.”

Difficult as it is, union organizing in the South is not impossible. The UAW already represents nearly 16,000 hourly workers at two Ford plants in Louisville and at a General Motors complex in Spring Hill, Tennessee.

UAW President Ray Curry, who attended the Tennessee ceremony this week, said he didn't think Ford had chosen sites in Stanton, Tennessee, and Glendale, Kentucky, to avoid the UAW. He expressed optimism about organizing the new factories.

“We’ve got a long-term working relationship with Ford," Curry said. “It’s just a great opportunity to continue in that relationship.”

Todd Dunn, president of the UAW local office in Louisville, sounded hopeful, too. He said he regarded the remarks this week by Ford's CEO Farley as cautionary in a politically charged environment.

“I think that might be them saying, ‘Hey, in a right-to-work state, we’re going to make sure they (workers) have their choice.' "

The union, Dunn said, will campaign on a promise to seek better wages and benefits, health and safety advocacy and a greater voice for workers.

The new Ford site in Stanton, Tennessee, lies in rural Haywood County, about 50 miles east of Memphis, one of only a few counties in the state that voted for Biden in the 2020 election. That bodes well for union organization, Vanderbilt’s Cornfield said. Unions historically have succeeded in the South, he said, when they organize branch operations of companies from the North that already are unionized.

“On the other hand," Cornfield noted, “the Southern political climate in terms of government tends to be Republican and opposed to unionization.”

Tennessee's “right to work” law has existed for more than seven decades. Republican state lawmakers have already established a question for the 2022 ballot asking voters whether that law should be enshrined in the Tennessee Constitution, further complicating the conversation for Ford.

So far, Republican U.S. Sens. Bill Hagerty and Marsha Blackburn haven't publicly opposed a union at the Ford facilities, which are still years away from opening. But both stressed the state's right-to-work law, with Hagerty saying he hopes future workers who will decide whether to unionize “will be mindful of the pro-business, pro-competition and pro-worker policies of Tennessee.”

Auto companies generally want to pay less at plants that make parts, such as batteries, rather than assemble vehicles. But the UAW will seek assembly-plant wages at those facilities.

It may be easier for the union to organize in Kentucky, a solidly red state but one with a Democratic governor who supports the UAW. Glendale is about 50 miles south of Louisville, a union stronghold that includes the only unionized teachers in the state, said Kenneth Troske, an economics professor at the University of Kentucky.

The state has some history with unions in coal mining and auto production and only recently, in 2017, did it pass a “right to work” law.

But it has voted solidly Republican of late. And a huge Toyota factory in the center part of the state has remained nonunion.

“We used to be a pretty strongly pro-union state,” Troske said. “That certainly has changed. We are Republican. We are as red as red gets now.”