About 169 investors invested about $85 million in the project. 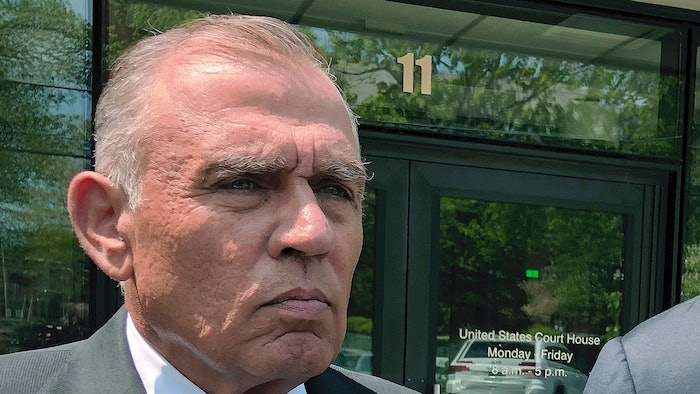 In this May 22, 2019, file photo, Ariel Quiros, left, former owner of Jay Peak Resort, stands outside the federal courthouse in Burlington, Vt., after his arraignment on fraud charges over a failed plan to build a biotechnology plant using foreign investors' money. The Miami businessman, accused of being the mastermind behind a massive fraud case involving foreign investors' money in Vermont developments, is expected to plead guilty in next week in a plea deal in which prosecutors are seeking a sentence of more than eight years in prison.
AP Photo/Lisa Rathke, File

A former Vermont ski resort president has reached a plea deal over a failed plan to build a biotechnology plant in Newport using tens of millions of dollars in foreign investors' money.

William Stenger, the former president of Jay Peak Resort, has agreed to plead guilty to providing false statements and faces up to five years in prison, according to the deal filed in court on Wednesday. Nine other charges were dropped as part of the plea agreement. Stenger is due in court on Friday. VTDigger first reported on the development.

Stenger was expected to go on trial in October and is the third man in the case to reach a plea deal.

“The Jay Peak developers, including Mr. Stenger, routinely provided the State of Vermont false, misleading, and fraudulent information throughout the course of our dealings. I am pleased Mr. Stenger has taken responsibility for similar deceptive statements to the U.S. government," said Michael Pieciak, commissioner of the Vermont Department of Financial Regulation in a written statement.

Stenger’s attorney said Wednesday that he could not not comment on the plea deal.

Miami businessman Ariel Quiros, the former owner of Jay Peak and Burke Mountain ski resorts in northern Vermont, changed his plea to guilty last August on charges of conspiracy to commit wire fraud, money laundering and the concealment of material information. Nine other charges were dropped.

Quiros, Stenger, and William Kelly, an advisor to Quiros, were indicted over a failed plan to build a biotechnology plant in Newport, Vermont, using millions raised through the EB-5 visa program, which encourages foreigners to invest in U.S. projects that create jobs in exchange for a chance to earn permanent U.S. residency.

The AnC-Bio project was designed to raise $110 million from 220 immigrant investors to construct and operate the biotechnology facility, according to proceedings and documents. The investors could qualify for permanent resident status by investing $500,000 in an approved commercial enterprise.

About 169 investors invested about $85 million in the project, in addition to paying $8 million in “administrative fees,” according to the U.S. attorney’s office.

The federal Securities and Exchange Commission and the state of Vermont first accused Quiros and Stenger in 2016 of a “ massive eight-year fraudulent scheme " that involved misusing more than $200 million of about $400 million raised from foreign investors for various ski area developments “in Ponzi-like fashion."

There were about 800 investors in all the projects, which brought the promise of jobs to a remote area of northern Vermont that has some of the highest unemployment rates in the state.

Quiros and Stenger settled civil charges with the SEC, with Quiros surrendering more than $80 million in assets, including the two ski resorts. A court appointed receiver has been overseeing Jay Peak and Burke.

The e-commerce giant said the funding would help minority-led organizations build or preserve more than 500 units in its home city.
Jun 24th, 2022

Lawyers for "Sunny" Balwani have depicted him as a well-intentioned investor and entrepreneur.
Jun 21st, 2022
Follow Us
Most Recent