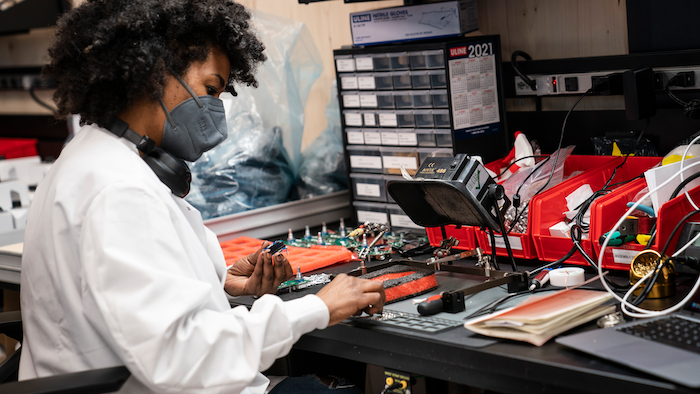 In this Wednesday, April 28, 2021 file photo, an employee manually assembles a circuit-board element before a ribbon-cutting ceremony to mark the opening of a Nanotronics manufacturing center at the Brooklyn Navy Yard in the Brooklyn borough of New York. Growth in U.S. manufacturing slowed slightly in April, reflecting in part supply-chain troubles, after hitting a 37-year high in March.
AP Photo/John Minchillo, Pool

WASHINGTON (AP) — Growth in U.S. manufacturing slowed slightly in April partly due to a snarled global supply chain after hitting a 37-year high in March.

The Institute for Supply Management, a trade group of purchasing managers, said Monday that its index of manufacturing activity fell last month to a reading of 60.7. That was down from a March reading of 64.7, which had been the highest level since December 1983.

Any reading above 50 indicates manufacturing is expanding. April was the 11th consecutive month manufacturing has grown after contracting in April 2020, when the country was struggling to deal with the shutdowns caused by a global pandemic.

The slowdown in April reflected a number of problems facing U.S. factories including disruptions in supply chains for critical components such as computer chips.

The problems manufacturers are having dealing with supply chains showed up in several categories from the prices paid for components rising sharply to an increase in the backlog of unfilled orders.

“What started out as a shortage of semiconductors affecting mostly the auto industry is now a shortage of basically everything, including lumber, metals and plastics,” said Michael Pearce, senior U.S. economist at Capital Economics.

But Pearce noted that even with the decline, the manufacturing index remained at a high level that was consistent with growth in the overall economy of a robust 6%.

The government reported last week that the economy, as measured by the gross domestic product, grew by a solid 6.4% between January and March with many analysts expecting growth could top 10% in the current quarter as the economy re-opens further.

Timothy Fiore, chair of the ISM manufacturing survey committee, said that companies are not able to meet demand because of supply constraints on the materials they need and a shortage of labor. He predicted businesses will start pushing wages higher to attract workers and will also start paying more for raw materials.

“Companies will pay whatever it takes to get people and materials,” he said. “You can't lose market share because once you lose it, it is hard to get it back.”

The ISM report showed that optimistic comments about the future compared with cautious statements from companies came in at a ratio of 11- to-1 up from an 8-to-1 ratio in March.

All six of the biggest manufacturing industries including fabricated metal products, chemical products, food and beverages, and computer and electronic products, registered moderate to strong growth in April.