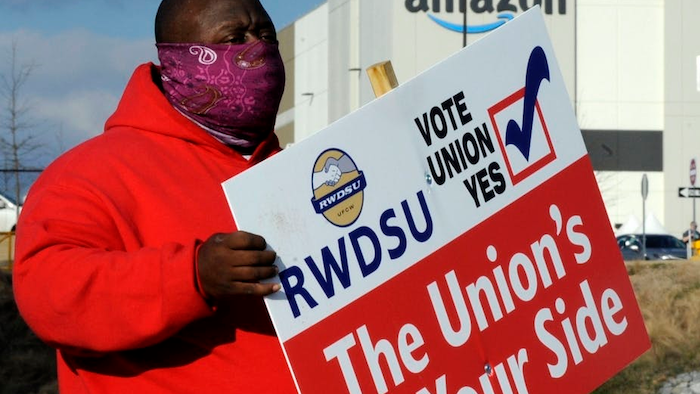 Amazon workers in Bessemer, Alabama, are hoping to become the retailer’s first unionized employees in the U.S.
AP Photo/Jay Reeves

Several thousand Amazon workers in Bessemer, Alabama, are currently voting on whether to form the retailer’s first-ever union. The election has been contentious, with workers complaining that Amazon is using aggressive tactics to defeat the vote, while high-profile figures including President Joe Biden have weighed in on the side of the union.

Voting continued through March 29. We asked Raymond Hogler, an employment relations expert at Colorado State University, to explain what’s happening and why it matters.

1. Why do Amazon workers want to form a union, and how do they begin?

In March 2021, the Retail, Wholesale and Department Store Union asked the National Labor Relations Board to hold an election at the Amazon fulfillment center in Bessemer. Some 6,000 workers are eligible to vote by secret ballot about whether they want the union to represent them in their dealings with Amazon.

Amazon, one of the largest employers in the world, has no collective bargaining agreements with any of its U.S. employees – though it does in Europe. Workers typically seek union representation for higher wages and better benefits, and a union can provide a higher level of job security through seniority provisions and grievance procedures in contracts.

As part of its efforts to avoid unionization, Amazon is holding mandatory meetings with employees and distributing written materials to influence the vote.

2. What happens if the the union wins the election?

Winning the election doesn’t automatically mean workers are unionized and get a labor contract. It means only they have the right to negotiate for one. The employer has a duty under the National Labor Relations Act to bargain with the union, but it does not have an obligation to agree to anything the union proposes.

The law states in Section 9 that the requirement to bargain collectively is “the performance of the mutual obligation of the employer and the representative of the employees to meet at reasonable times and confer in good faith with respect to wages, hours and other terms and conditions of employment.”

Of course, Amazon could simply shut down the facility – but it couldn’t reopen the same facility elsewhere to escape unionization. While American employers have an absolute right to close their business rather than deal with a union, they do not have a right to shut down one location and move to a different place just to avoid letting workers unionize, as the labor board has held in cases of so-called runaway shops.

And since Alabama is a right-to-work state, workers will be able to decide whether or not to pay union dues. In general, this is one way right-to-work laws impair union strength.

3. What happens if they don’t reach an agreement?

The board has no authority to make an employer agree to a contract. If an employer bargains in good faith but the parties fail to reach an agreement, the union has a right to strike.

And if the National Labor Relations Board finds that an employer violated the law during the election, it could order more negotiations.

4. How about if Amazon wins?

If the election is deemed “valid” by the board and the effort to unionize fails, workers will have to wait another year before trying again. This is to prevent unions from engaging in continuous organizing efforts and repetitive elections. But if the employer violated the law, the board has the authority to conduct a rerun election or order Amazon to bargain with the union anyway.

An example violation would be if Amazon offered all the employees an unexpected bonus just before the voting begins. The union could argue that this tactic was an illegal conferral of a benefit to discourage unionization.

5. What does this election mean for the broader labor movement?

Organized labor views the Amazon campaign as an opportunity to publicize the weaknesses of current law and to create momentum for new legislation that would help workers organize.

One such bill currently before Congress, the Protecting the Right to Organize Act, would establish a more favorable legal environment for unions by easing rules for union recognition and beefing up penalties for violations of workers’ rights.

Advocates for the act claim in addition that reform increase incomes for more working-class Americans and reduces inflation-adjusted average incomes for the bottom 90% of households.

Richard Trumka, president of the AFL-CIO, said the new legislation is needed to protect workers because many of them “break the law” during union organizing drives. He said the Protecting the Right to Organize Act “creates a true deterrent, so employers think twice before violating the law.”

This article is republished from The Conversation under a Creative Commons license. Read the original article here: https://theconversation.com/whats-at-stake-in-amazons-bessemer-alabama-union-vote-5-questions-answered-157498.