MADISON, Wis. (AP) — Wisconsin animal health officials are cautioning the state’s mink producers about the dangers of the coronavirus following outbreaks among animals on several farms in Europe, spurring renewed calls from animal rights activists to ban the fur trade.

There are no confirmed cases of COVID-19 within the state's $223 million mink industry, which is the largest in America. Still, producers say they're taking precautions to protect their herds, the Wisconsin State Journal reported.

The guidance revealed that the virus that causes COVID-19 has been detected in mink on multiple farms in the Netherlands and research has shown ferrets, a close relative of mink, can catch and spread the disease in laboratory settings. It noted that there is no evidence suggesting that animals “play a significant role in spreading the virus to humans,” though it cautioned that further study was needed.

Many coronaviruses can spread through coughing or sneezing, or by touching an infected person, but officials said the present illness does not not transmit readily between people. Earlier this year, the Wuhan (China) Municipal Health Commission said some of the infected patients ran businesses in a seafood market, meaning it’s possible they were infected by animals there. The market was suspended and under investigation.

The state, which had 67 mink farms as of the last USDA census, supplied nearly half of the country's roughly 3 million pelts sold in 2018. The state’s fur exports that year were worth close to $227 million, DATCP estimates.

Bob Zimbal is the owner of Zimbal Minkery in Sheboygan, the state's largest mink producer. He said he’s not concerned about the potential for infection, noting that his operation has always had biosecurity procedures in place and is now doing temperature checks on staffers.

U.S. animal rights activists contend that the European outbreak shows that confined animal breeding is a public health matter, and they want to see more controls on the mostly unregulated domestic fur industry.

“Mink farms are really kind of breeding grounds for infectious diseases,” said PJ Smith, director of fashion policy for the Humane Society of the United States. “Not only is this industry horribly cruel to animals and bad for the environment, but now it’s a risk for the spread of COVID-19.” 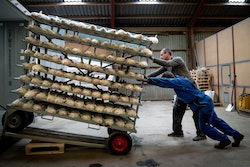 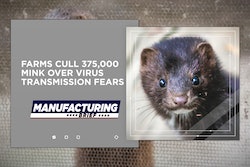