Tesla Factory Dispute May Be Over

It's not clear whether Tesla or CEO Elon Musk will face any punishment for reopening in defiance of county orders. 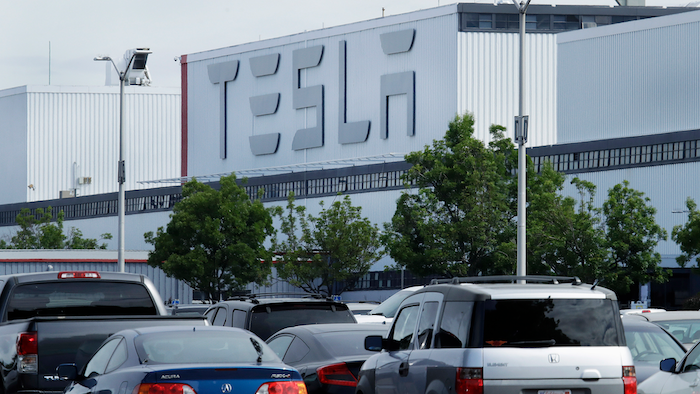 This photo shows vehicles in the parking lot of the Tesla electric car plant Wednesday, May 13, 2020, in Fremont, Calif.
AP Photo/Ben Margot

DETROIT (AP) — It appears the dispute between Tesla and San Francisco Bay Area authorities over the reopening of a factory in the face of shutdown orders appears to have ended.

The Alameda County Public Health Department announced on Twitter late Tuesday that the Fremont, California, plant will be able to go beyond basic operations this week and start making vehicles Monday — as long as it delivers on worker safety precautions that it agreed to.

It wasn't clear from a news release whether Tesla and its CEO Elon Musk would face any punishment for reopening last Monday in defiance of county orders. Messages were left early Wednesday seeking comment from health officials and Tesla.

The release said Fremont police would verify whether Tesla was holding up its part of the agreement. The deal requires that public health indicators have to remain stable or improve for the factory to stay open.

“We will be working with the Fremont PD to verify Tesla is adhering to physical distancing and that agreed upon health and safety measures are in place for the safety of their workers as they prepare for full production,” the release said.

Tesla’s factory reopened Monday for pre-production with Musk practically daring local authorities to arrest him, and operations apparently continued into Tuesday. The company met a Monday deadline to submit a site-specific plan to protect worker safety.

But the reopening defied orders from the health department, which has deemed the factory a nonessential business that can’t fully open under restrictions intended to slow the spread of the novel coronavirus.

The health department has said it warned the company was operating in violation of the county health order, and hoped Tesla will “comply without further enforcement measures” until the county approves a site-specific plan required by the state.

Gov. Gavin Newsom framed the issue Wednesday as a local dispute, noting that the state guidelines have allowed some manufacturing “for weeks" when counties permit resumption. He said he's urged local governments to follow the state's approach in dealing with rogue operators by seeking “not to be punitive at first."

“It sounds like, based upon the progress that’s been made public, with the county and Tesla, that they were able to resolve their issue in fairly short order along those same lines," he said.

State law allows a fine of up to $1,000 a day or up to 90 days in jail for operating in violation of health orders.

Public health experts have credited stay-at-home orders with slowing the spread of the coronavirus, and helping hospitals handle an influx of cases. The coronavirus causes mild or moderate symptoms for most people. But it has killed more than 80,000 people in the U.S., with the death toll rising.

Alameda County was among six San Francisco Bay Area counties that were the first in the nation to impose stay-at-home orders in mid-March. Newsom has repeatedly said that counties can impose restrictions that are more stringent than state orders.

The order in the Bay Area has been extended until the end of the month, but the counties plan to allow some limited business and manufacturing starting May 18, the same day Detroit automakers plan to reopen auto assembly plants. Some auto parts plants were to restart production this week.

The Detroit automakers’ 150,000 U.S. workers are represented by the United Auto Workers union, which has negotiated for added safety precautions. Tesla’s workers do not have a union.

Musk, whose company has sued Alameda County seeking to overturn its order, threatened to move Tesla’s manufacturing operations and headquarters from the state.

Tesla contends in the lawsuit that Alameda County can’t be more restrictive than orders from Newsom. The lawsuit says the governor’s coronavirus restrictions refer to federal guidelines classifying vehicle manufacturing as essential businesses that are allowed to continue operating.

Tesla released a plan to maintain worker safety, including wearing gloves and masks, installing barriers between workers and maintaining social distancing. Local officials said the company initially pushed back on checking employee temperatures before boarding a company bus to get to work. But Tesla relented and agreed to check workers.