At a minimum, the COVID-19 crisis could be the death knell for some recent polarizing office trends. 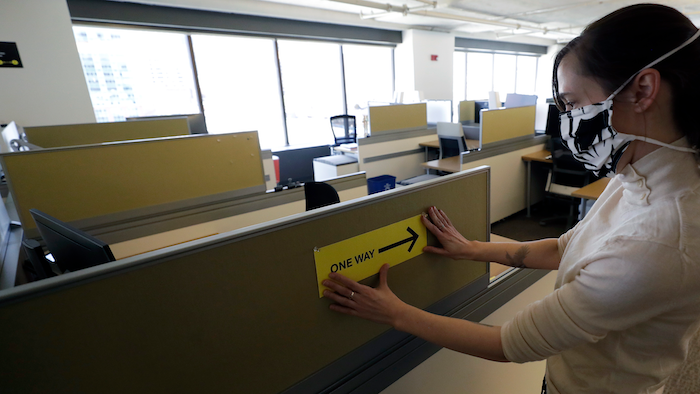 This Thursday, May 7 photo shows Interior Designer Stephanie Jones at the design firm Bergmeyer putting up a safe distancing reminder indicating one way foot traffic to a cubicle at the firms offices in Boston.
AP Photo/Steven Senne

LONDON (AP) — Office jobs are never going to be the same.

When workers around the world eventually return to their desks, they’ll find many changes due to the pandemic. For a start, fewer people will go back to their offices as the coronavirus crisis makes working from home more accepted, health concerns linger and companies weigh up rent savings and productivity benefits.

For the rest, changes will begin with the commute as workers arrive in staggered shifts to avoid rush hour crowds. Staff might take turns working alternate days in the office to reduce crowding. Floor markings or digital sensors could remind people to stand apart and cubicles might even make a comeback.

“This is going to be a catalyst for things that people were too scared to do before,” said John Furneaux, CEO of Hive, a New York City-based workplace software startup. The pandemic “gives added impetus to allow us and others to make changes to century-old working practices.”

Hive plans to help employees avoid packed rush hour subway commutes by starting at different hours, said Furneaux, who tested positive for COVID-19 antibodies. In Britain, the government is considering asking employers to do the same.

At bigger companies, senior executives are rethinking cramming downtown office towers with workers. British bank Barclays is making a “long-term adjustment in how we think about our location strategy,” CEO Jes Staley said. “The notion of putting 7,000 people in a building may be a thing of the past.”

That is already happening in China, where lockdowns started easing in March. Beijing municipal authorities limited the number of people in each office to no more than 50% of usual staffing levels, required office workers to wear face masks and sit at least 1 meter (3.3 feet) apart.

At a minimum, the COVID-19 crisis could be the death knell for some recent polarizing office trends, such as the shared workspaces used by many tech startups to create a more casual and creative environment. Cubicles and partitions are making a return as the virus speeds the move away from open plan office spaces, architects say. 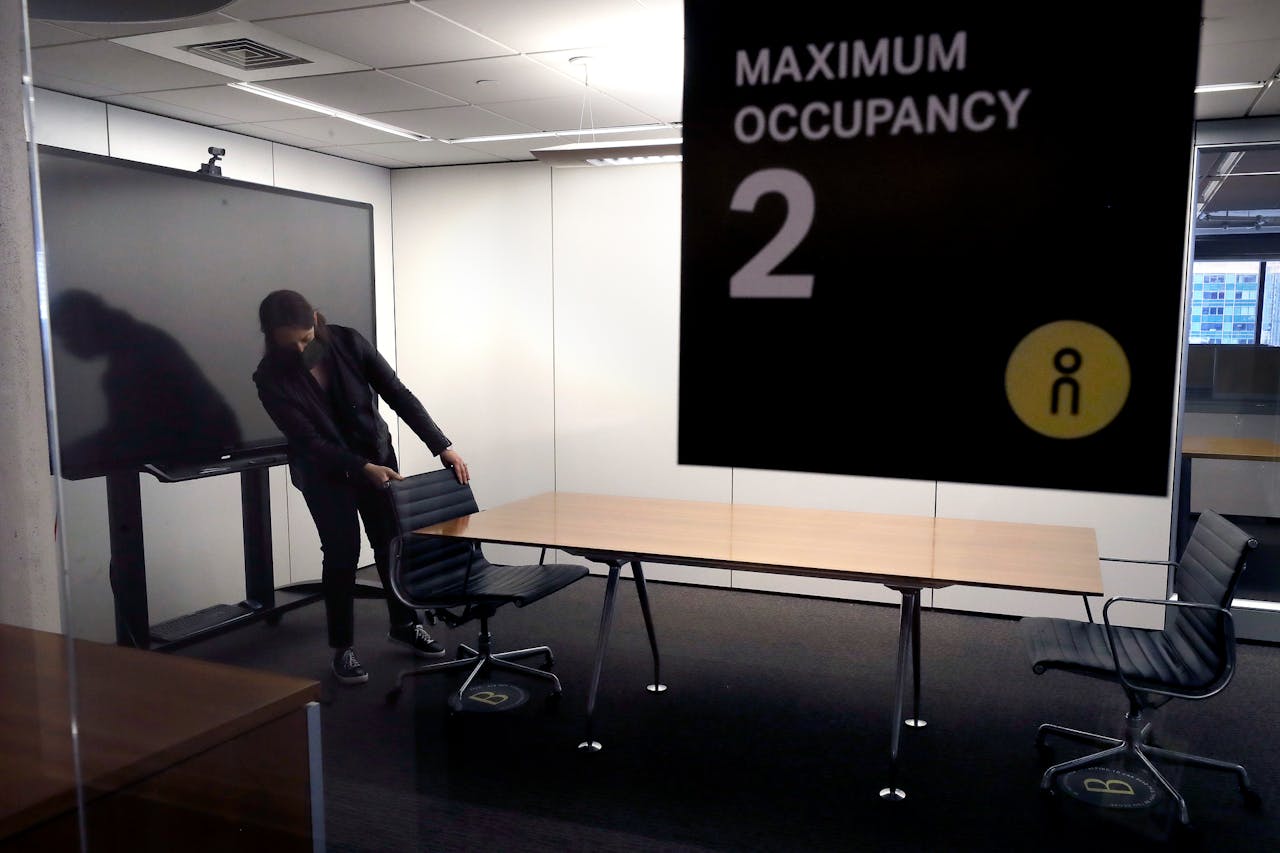 In this Thursday, May 7 photo, Vice President Rachel Zsembery at the design firm Bergmeyer, positions chairs in a conference room with a designated maximum occupancy of two people, at the firms offices, in Boston. Out of concern for the coronavirus Bergmeyer is restructuring the way its workspace is used, including reinstalling dividers on 85 desks at its Boston office that had been removed over the years.AP Photo/Steven Senne

Design firm Bergmeyer is reinstalling dividers on 85 desks at its Boston office that had been removed over the years. That “will return a greater degree of privacy to the individual desks, in addition to the physical barrier which this health crisis now warrants,” said Vice President Rachel Zsembery.

There's no rush to return. At Google and Facebook, employees will be able to work remotely until the end of the year. Other firms have realized they don’t even need an office.

Executives at San Francisco teamwork startup Range had given notice on their office because they wanted someplace bigger. But when California’s shelter in place order was issued, they instead scrapped their search and decided to go all remote indefinitely, a move that would save six figures on rent.

“We were looking at the writing on the wall,” said co-founder Jennifer Dennard.

One upside of having an all-remote workforce is that the company can hire from a broader pool of candidates beyond San Francisco, where astronomical housing costs have priced out many. But Dennard said the downside is that it eliminates the “chaotic interruptions” - the chance encounters between staff members that can spark creativity, so the company is planning more online collaboration.

Good Brothers Digital, a public relations firm in Wales, also ditched its office space in downtown Cardiff. Director Martyn John said productivity is just as high as it was before the pandemic forced them to work from home, so he decided to give up the company’s office space to save on rent, one of his biggest expenses.

Why drag employees into the office if they’re happier working from home, he reasons.

“People are just going to expect it now.”

Many changes are expected to remain in place even after the COVID-19 threat ends, as companies prepare for new disease outbreaks or other emergencies.

The work from home trend will only continue to accelerate, according to consultancy Gartner.

After the pandemic, 41% of employees expect to work remotely at least some of the time, up from 30% before the outbreak, according to 220 human resources executives it surveyed. Workers who do return will likely welcome wearing office attire once again as a signal things are going back to normal, Gartner said.

Not all companies can go fully remote, especially big corporations with thousands of staff. Even so, they’re thinking carefully about who should return to the office and who can and should continue to work from home.

At Dell, more people are going to work from home but “we’re still going to need offices,” because some jobs are best done there, said Chief Digital Officer Jen Felch. She cited customer support staff, who can access more resources at the office to diagnose equipment problems.

More than 90% of Dell’s 165,000 full-time global staff are working remotely during the pandemic, compared with 30% before it started. Once lockdown sends, she estimates that number will be above 50%.

The outbreak is also going to force companies to take hygiene much more seriously.

“The amount of people cleaning and sanitizing an office is going to shoot through the roof,” said Brian Kropp, Gartner’s chief of human resources research.

Extra attention will go to places like conference rooms, which will have to be cleaned between uses, bringing added disruption, he said.

Or companies could do away with in-person meetings altogether.

“What’s the point of sanitizing everybody’s desk if you’re getting them all in the same room,” said Hive’s Furneaux, who said he’s thinking carefully about how to hold events such as “all-hands meetings” for his 70 staff. “We might get the weird scenario of in-office conference calls.”

High tech solutions will play a role, such as sensors to remind people to maintain social distancing, said Joanna Daly, vice president for corporate health and safety at IBM.

One possible example: “We’d want our phones to buzz if we got closer than 2 meters while we were having a conversation,” she said.