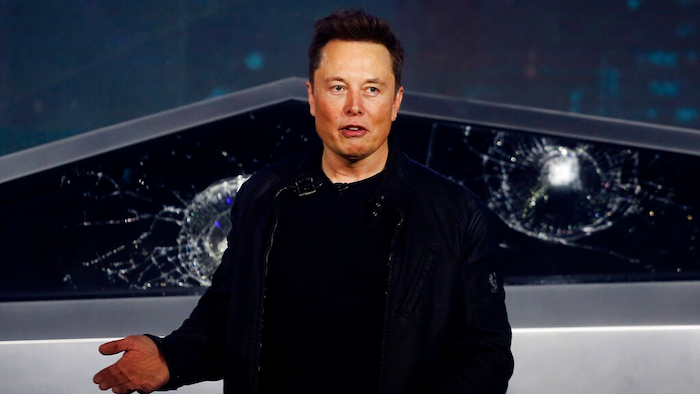 In this Nov. 21, 2019, file photo, Tesla CEO Elon Musk introduces the Cybertruck at Tesla's design studio in Hawthorne, Calif. Tesla CEO Elon Musk appears to have hit all the milestones necessary to receive a stock award currently worth about $730 million to pad the eccentric billionaire's already vast fortune. The electric car maker ended Wednesday, May 6, 2020, with an average market value of $100.4 billion for the past six months, according to data drawn from FactSet Research.
AP Photo/Ringo H.W. Chiu, File

BERKELEY, Calif. (AP) — Tesla CEO Elon Musk appears to have hit all the milestones he needed to receive a stock award now worth about $730 million, a payday that will further pad the eccentric billionaire’s vast fortune.

The electric car maker ended Wednesday with an average market value of $100.4 billion for the past six months, according to data drawn from FactSet Research. That was the final hurdle that Tesla needed to clear for Musk to receive nearly 1.69 million stock options priced at $350.02. Tesla's stock closed at $782.58 Wednesday, translating into a pre-tax gain of about $730 million if Musk were able to exercise them immediately.

But Musk can't sell the newly awarded stock for at least five years after he receives the options, according to the company's most recent quarterly report. That filing made last week disclosed Tesla expected Musk to qualify for the stock award at some point before July. Musk can afford to wait before cashing in on his latest windfall, given his wealth is currently estimated at $39 billion by Forbes magazine.

Tesla declined to comment about Musk's pay package beyond its disclosures in regulatory filings.

The Palo Alto, California, company had already hit the revenue and adjusted earnings benchmarks that Musk needed to receive the first portion of one of the biggest pay packages in U.S. history. All told, the incentives approved by Tesla’s board in 2018 consist of 20.3 million stock options that will be doled in 12 different bundles if the company is able to reach progressively more difficult financial goals.

In order for Musk to receive all 20.3 million stock options, Tesla will have to generate adjusted annual earnings of $14 billion on annual revenue of $175 billion coupled with a market value of $650 billion. In the past four quarters, Tesla has reported adjusted earnings totaling $3.6 billion on revenue totaling $26 billion.

The company's market value currently stands at $145 billion, driven by an 87% run-up in its stock so far this year. The surge reflects a growing belief that that Musk will deliver on his promise to transform Tesla from a niche maker of luxury cars running on electricity to a mass market automaker.

Musk, though, rattled Wall Street late last week when he tweeted that he believed Tesla's stock had soared too high. The shares plunged by more than 10% after he made that startling assessment, but have bounced back during the past three trading sessions.

It wasn't the first time that Musk has affected Tesla's stock with his tweets. In 2018, he tweeted that he had lined up financing to pursue a buyout bid for Tesla, causing the company's then-slumping shares to rally. Regulators alleged Musk was misleading investors, resulting in a $ 40 million settlement that also was supposed to ban him from using his Twitter account to post statements that could affect Tesla's stock unless he got the approval of a company lawyer.

More recently, Musk has created waves by railing against stay-at-home restrictions that have forced most businesses to close as part of the effort to slow the spread of the novel coronavirus that causes OVID-19. The clampdown has forced Tesla to close a San Francisco Bay Area factory that produces most of its cars.