The nation's largest utility hired him to rescue it from a financial mess caused by a history of negligence. 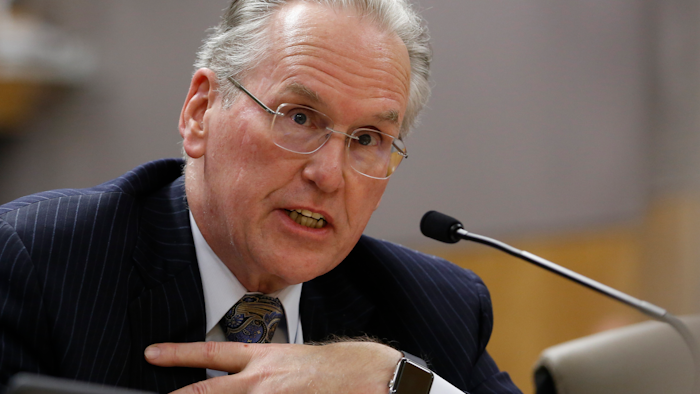 In this Nov. 18, 2019, file photo, Pacific Gas & Electric CEO Bill Johnson speaks during an oversight hearing of the Energy, Utilities and Communications committee at the Capitol in Sacramento, Calif.
AP Photo/Rich Pedroncelli, File

BERKELEY, Calif. (AP) — PG&E Corp. CEO Bill Johnson will step down from his job just 14 months after the nation's largest utility hired him to rescue it from a financial mess caused by a history of negligence and to change a corporate culture that emphasized profits over safety, the company announced Wednesday.

Johnson's June 30 retirement was not expected, but it did not come as a surprise as PG&E tries to emerge from a bankruptcy triggered by deadly 2017 and 2018 wildfires ignited by its decaying electrical grid.

Both California Gov. Gavin Newsom and the head of PG&E's chief regulator have pressured the company to oust its entire 14-member board of directors, including Johnson.

His retirement is timed to coincide with the deadline for PG&E to wrap up its bankruptcy case. The deal includes $25.5 billion to pay for Northern California wildfires that killed nearly 130 people and destroyed more than 25,000 buildings.

As part of the deal, PG&E had agreed only to replace some board members, but gave no sign it planned to ask Johnson to step aside so soon after bringing him in from Tennessee, where he ran another large utility.

Johnson's departure clears the way for PG&E to work with the state to bring in a new leader who government officials believe is better qualified to oversee the utility.

Priorities for the next CEO include installing about $40 billion in badly needed equipment upgrades and managing its deliberate blackouts during wildfire season to reduce the the chances its equipment ignites more fires.

“As we look to PG&E’s next chapter, this great company should be led by someone who has the time and career trajectory ahead of them to ensure that it fulfills its promise to reimagine itself as a new utility and deliver the safe and reliable service that its customers and communities expect and deserve," Johnson, 66, said in a statement.

Once Johnson steps down, he will be temporarily replaced by a former AT&E executive, Bill Smith, who joined PG&E's board four months ago. PG&E gave no timeline for how long Smith will serve as interim CEO.