The largest share of the job losses came from firms with 50 workers or more. 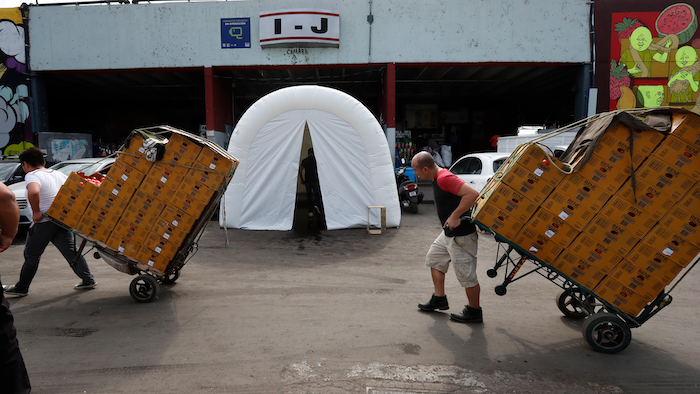 Workers pull dollies loaded with boxes of produce past a decontamination tent at the Centro de Abastos, the main food distribution center in Mexico City, Tuesday, April 7, 2020. The tent was set up a measure to help slow down the spread of the new coronavirus pandemic.
AP Photo/Marco Ugarte

MEXICO CITY (AP) — Mexico’s Labor Department said Wednesday the country has lost 346,748 jobs since mid-March due to the economic impact of the new coronavirus and distancing measures imposed to fights its spread.

The biggest job losses occurred in the heavily tourism-dependent Caribbean coastal state of Quintana Roo, which lost almost 64,000 jobs. The state is home to resorts like Cancun and Playa del Carmen, which have been hit hard by recommendations that people limit travel.

The department said the largest share of the job losses during the period from March 13 to April 6 — almost 250,000 — came at firms with 50 workers or more, rather than the smaller businesses that dominate Mexico’s economic landscape.

“We are calling on these companies to reconsider, and recognize that the key thing at this moment is to show solidarity with workers,” said Labor Secretary Luisa Maria Alcalde.

Officials said there was no legal basis for firing or laying off workers because of a public health emergency, and praised smaller firms for trying to hold on to their employees.

President Andrés Manuel López Obrador said small businesses “are holding up under the crisis, these small businessmen and women are acting responsibly and heroically, because they are caring for their employee's jobs."

López Obrador, whose relationship with business sector has been rocky at times, even published a list of companies that had let go of workers.

López Obrador had pledged to create 2 million new jobs are part of an emergency response plan, but Wednesday’s figures could make that goal harder to reach.

“I have already said that we are going to create 2 million jobs between May and December as part of the emergency plan, and so when we issue a report like this, it is to issue a call for support, and for people not to fire anyone and preserve jobs," the president said.

The International Labour Organization said in a report Wednesday that the pandemic has caused a drop of 5.7 % in the number of hours worked in Latin America and the Caribbean, equivalent to 14 million jobs across the region.

“We are facing a mass destruction of jobs, and that creates a challenge of unprecedented proportion in labor markets in Latin and the Caribbean, ”said ILO Regional Director Vinícius Pinheiro.

But Undersecretary of Health Hugo López-Gatell reported that Mexico has performed only about 16,700 tests, and said modelling suggests there are about eight times more cases of infections. Many people complaining of mild symptoms are sent home without testing, in part because their prognosis is good.