A green 'health code' on your phone is required to board a subway, check into a hotel or just enter the city. 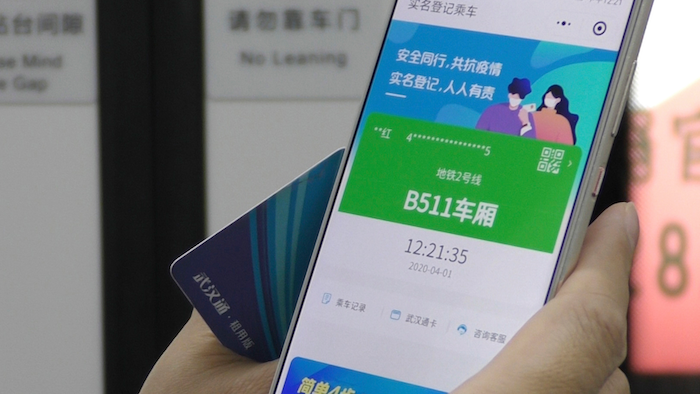 In this April 1, 2020, photo, a passenger holds up a green pass on their phone on a subway train in Wuhan in central China's Hubei province. Green is the "health code" that says a user is symptom-free and it’s required to board a subway, check into a hotel or just enter Wuhan, the central city of 11 million people where the pandemic began in December.
AP Photo/Olivia Zhang

WUHAN, China (AP) — Since the coronavirus outbreak, life in China is ruled by a green symbol on a smartphone screen.

Green is the "health code" that says a user is symptom-free and it’s required to board a subway, check into a hotel or just enter Wuhan, the central city of 11 million people where the pandemic began in December.

The system is made possible by the Chinese public's almost universal adoption of smartphones and the ruling Communist Party's embrace of "Big Data" to extend its surveillance and control over society.

Walking into a Wuhan subway station Wednesday, Wu Shenghong, a manager for a clothing manufacturer, used her smartphone to scan a barcode on a poster that triggered her health code app. A green code and part of her identity card number appeared on the screen. A guard wearing a mask and goggles waved her through.

If the code had been red, that would tell the guard that Wu was confirmed to be infected or had a fever or other symptoms and was awaiting a diagnosis. A yellow code would mean she had contact with an infected person but hadn’t finished a two-week quarantine, meaning she should be in a hospital or quarantined at home.

Wu, who was on her way to see retailers after returning to work this week, said the system has helped reassure her after a two-month shutdown left the streets of Wuhan empty.

People with red or yellow codes “are definitely not running around outside,” said Wu, 51. “I feel safe.”

Intensive use of the health code is part of the efforts by authorities to revive China’s economy while preventing a spike in infections as workers stream back into factories, offices and shops.

Most access to Wuhan, the manufacturing hub of central China, was suspended Jan. 23 to fight the coronavirus. The lockdown spread to surrounding cities in Hubei province and then people nationwide were ordered stay home in the most intensive anti-disease controls ever imposed. The final travel controls on Wuhan are due to be lifted April 8.

Other governments should consider adopting Chinese-style “digital contact tracing,” Oxford University researchers recommended in a report published Tuesday in the journal Science. The virus is spreading too rapidly for traditional methods to track infections “but could be controlled if this process was faster, more efficient and happened at scale,” the researchers wrote.

Once aboard the subway, Wu and other commuters used their smartphones to scan a code that recorded the number of the car they rode in case authorities need to find them later.

An attendant carried a banner reading “Please wear a mask throughout your trip. Do not get close to others. Scan the code before you get off the train.” Seats were marked with dots denoting where passengers were to sit to stay far enough away from each other.

Visitors to shopping malls, offices buildings and other public places in Wuhan undergo a similar routine. They show their health codes and guards in masks and gloves check them for fever before they are allowed in.

The health codes add to a steadily growing matrix of high-tech monitoring that tracks what China’s citizens do in public, online and at work: Millions of video cameras blanket streets from major cities to small towns. Censors monitor activity on the internet and social media. State-owned telecom carriers can trace where mobile phone customers go.

A vast, computerized system popularly known as social credit is intended to enforce obedience to official rules. People with too many demerits for violations ranging from committing felonies to littering can be blocked from buying plane tickets, getting loans, obtaining government jobs or leaving the country.

A statement by the city government of Tianjin, a port city of 16 million people adjacent to Beijing, said the health codes were temporary but offered no indication when use might end.

The codes are issued through the popular WeChat messaging service of internet giant Tencent Ltd. and the Alipay electronic payments service of Alibaba Group, the world’s biggest e-commerce company.

Some 900 million people use the system on WeChat, according to the newspaper Beijing Youth Daily and other outlets. No total for Alipay has been reported.

Obtaining a health code is simple: Users fill out an electronic form with their identity details, address and whether they have a cough or fever. The system includes no steps to confirm whether a user is healthy.

Authorities have threatened that violators will be “dealt with severely,” though detailed penalties have yet to be announced.

Regulations say people who try to travel with a red health code will be marked down in the social credit system.

“Fraud, concealment and other behaviors” carry penalties that “will have a huge impact on their future life and work,” a statement by the government of Heilongjiang province in the northeast said.