Europe's largest economy will suffer a deep slump in the first half of this year but should rebound relatively quickly. 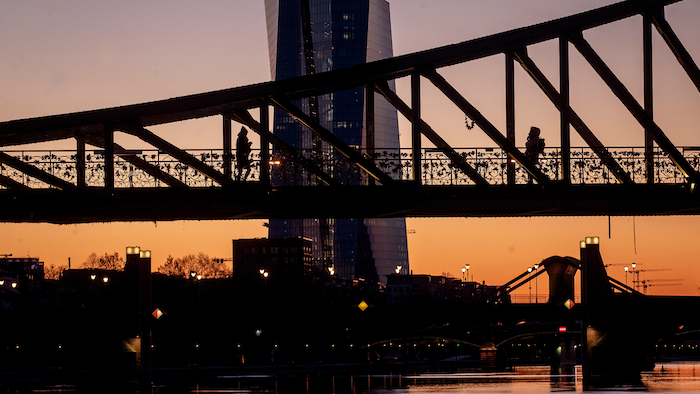 Two women walk over a bridge with the European Central Bank in background in Frankfurt, Germany, as the sun rises Monday, March 30, 2020. Due to the coronavirus the economy expects heavy losses. For most people, the new coronavirus causes only mild or moderate symptoms, such as fever and cough. For some, especially older adults and people with existing health problems, it can cause more severe illness, including pneumonia.
AP Photo/Michael Probst

FRANKFURT, Germany (AP) — A group of leading economists say Germany, Europe's largest economy, will suffer a deep slump in the first half of this year but should rebound relatively quickly from the disruption of the virus outbreak.

The German Council of Economic Experts predict that the economy will shrink 2.8% for the full year and rebound next year with growth of 3.7%, although their report issued Monday acknowledged a high degree of uncertainty about the length of the restrictive measures that have shut down much of the economy.

The base scenario is a V-shaped recovery, with a sharp downturn and quick rebound.

Member economist Volker Wieland of Frankfurt's Goethe University said that the downturn would be “deeper but not longer” than the recession following the global financial crisis a decade ago with a steep fall over the first six months followed by recovery.

“It is not like a war where the capital stock has been destroyed,” meaning many businesses could quickly resume operations, he said, conceding that “the uncertainty is immense.”

The report's alternative, more pessimistic scenarios include a deeper slump of 5.4% this year. Another scenario that assumes restrictive measures remain in place past the summer implies a slower recovery with a dip of 4.5% this year but only a 1.0% rebound in 2021.

The council's report contrasts with a more pessimistic estimate from Munich's Ifo institute of a fall in output of 7.2% to 11.2% this year.

The German economy shrank 5.7% in 2009 as a result of the global financial crisis and the Great Recession but rebounded the year after.