The U.S. Army Corps of Engineers spent hours scouring a shuttered Phoenix hospital to see how quickly it could be up and running again. 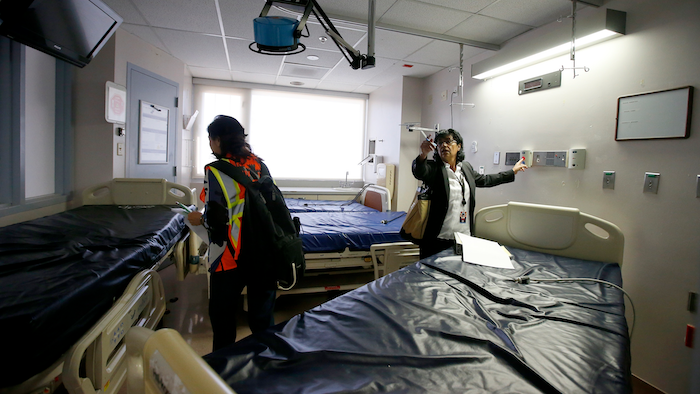 Susie McCann, right, of the Arizona health department, assess a room in the emergency area with a member of the U.S. Army Corps of Engineers as they tour the currently closed St. Luke's Medical Center hospital to see the viability of reopening the facility for possible future use due to the coronavirus Wednesday, March 25, 2020, in Phoenix.
AP Photo/Ross D. Franklin

PHOENIX (AP) — Officials from Arizona's health department and the U.S. Army Corps of Engineers spent hours Wednesday scouring a shuttered Phoenix hospital to see how quickly it could be running if an expected surge of coronavirus cases hits.

The state is looking to reopen two closed Phoenix hospitals and convert a specialty hospital. The review of the closed St. Luke's Medical Center is part of an effort to nearly double hospital capacity from the current 16,900 to the nearly 30,000 officials say might be needed by May.

"Even if they can do that by 50%, that would be another 8,000 beds potentially and another 700 ICU beds," Health Services Department Director Dr. Cara Christ said. The state currently has about 1,500 intensive care unit beds.

Christ said her projections for new beds range from 7,000 to 13,000. The agency is also scouring the state's outpatient surgical centers for bed space and equipment like ventilators that the most critically ill patients may need, and looking to anesthesia and CPAP machines used for sleep apnea that can be converted into ventilators.

A state request to the federal government to provide 5,000 ventilators has been approved, but is unlikely to be fully met, at least quickly. New York, now the nation's hotspot for COVID-19 cases caused by the new virus, asked for 30,000 but is getting just 4,000.

Christ is also asking the Army Corps to look at large facilities that could be set up for patients no longer needing acute hospital care but still too ill to go home. Those might include the Coliseum at the state fairgrounds in Phoenix.

“We expect our surge of illness and infections to really increase by the mid- to end of April, with hospitalizations peaking in May, per our modeling," Christ said.

The dire predictions come as the number of cases statewide reached 401, up from just 30 a week before. Mohave County saw its first two cases and implemented state-mandated business restrictions and closings Wednesday.

Just three small counties — Gila, Greenlee and La Paz — are not yet subject to the restrictions. State health officials confirmed late Tuesday a sixth virus-related death — a Coconino County man in his 50s with an underlying health condition.

At St. Luke's in Phoenix, about two dozen staff from the Army Corps, health department and hospital engineering went through the nine-story building, checking air conditioning, electrical, plumbing and oxygen systems. The 240-bed facility closed last year and looks eerily empty, with surgical suites at the ready, an entire floor packed with beds and whiteboards at nurses stations still covered with names and room numbers.

The state has been using federal funding to help hospitals plan for “surge capacity” for two decades, including $18 million in the last two years, Christ said.

The Mayo Clinic in north Phoenix has been planning for the virus outbreak since shortly after it first appeared in China late last year and stopped elective surgeries to conserve resources like masks and gowns even before Ducey ordered them halted last week, CEO Dr. Dr. Richard Gray said Tuesday. The specialty hospital has about 300 beds but could nearly double capacity if needed and is retraining doctors and others who normally do elective surgeries to help with virus care.

Gray hopes the huge outbreaks in New York and other states help Arizona. He said the most important thing isn't necessarily hospital capacity, but the public's ability to slow the virus spread by using good hygiene and social distancing.

“Arizona is fortunate to be a little later in this process so that all of us can learn and plan on others’ experiences,” Gray said. “And the most important thing as to whether we’ll have enough staff, beds, ventilators, whatever the case may be, is how responsibly the public acts in being able to slow the spread of it.”